This weekend was a special occasion…Noah’s grandparents celebrated their 60th wedding anniversary! We were lucky enough to get to go to Vermont to celebrate the day with them. And it was a celebration indeed! The festivities focused around a wonderful dinner.

The main event was a grilled trout that was stuffed with herbs and scallions and marinated for about an hour (we speculated that longer marination might have resulted in an even stronger flavor):

The fish was a bit startling to look at – (EYEBALLS!) – but the yummy smells got going as soon as the fish was cooking. Getting the fish on the grill required a somewhat involved process of moving the fish from the pan to the grill without letting all the herbs and such from the inside spill out: 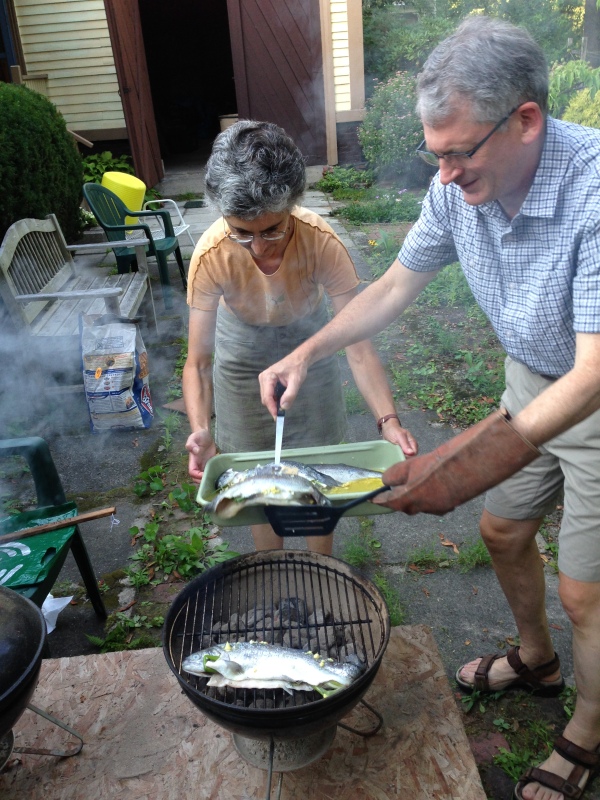 Meanwhile, the indoor preparations were also underway: setting the table, preparing a cucumber/radish/yogurt dressing side dish, and cooking a “salad” of sauteed peppers and green beans over lettuce: 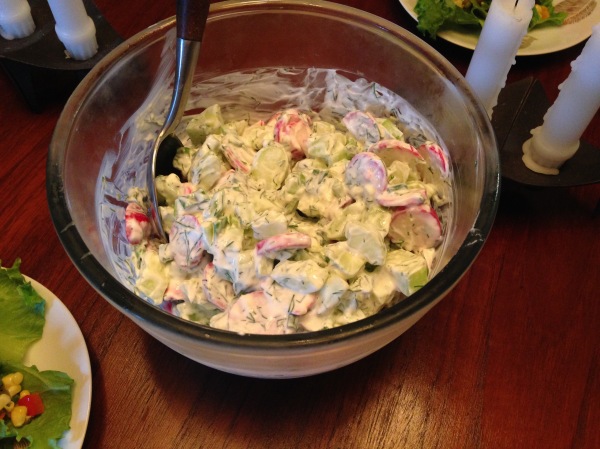 Soon enough, the fish was done!

Everything was delicious, and it was really nice to see three generations of the family there!

Plus, there was lemon cake with passionfruit filling for dessert so…who could ever complain? 🙂

To recap, my trip to Vermont was full of wonderful food, skiing, maple syrup and cheese, and hiking adventures.

Here are a few other moments….

Enjoying a hot chocolate and maple latte at Espresso Bueno: 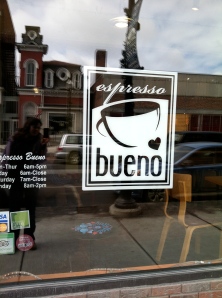 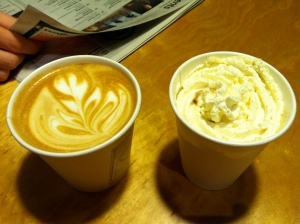 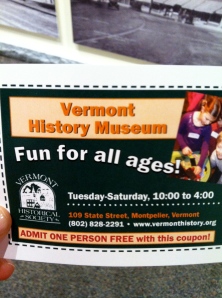 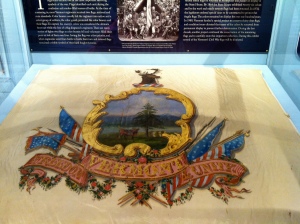 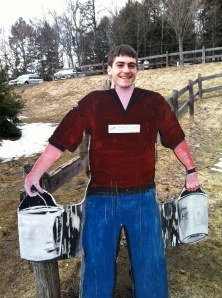 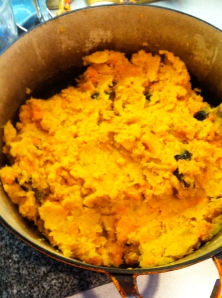 That’s my trip in a nutshell!

While in Vermont, Noah and I decided it would be fun to go for a hike. Luckily, Noah’s family had this nifty book in their library:

How appropriate. We found a hike up Mt. Hunger that looked appealing. It was a 4 mile hike (2 miles up, 2 miles down), that brought us up a 2,200 elevation climb to a great lookout peak.

Doesn’t that look nice? Turns out that Mt. Hunger was a little more than we originally bargained for.

For the record, the trip up the mountain was quite nice. We both had nice boots to wear…

…and came with positive attitudes… 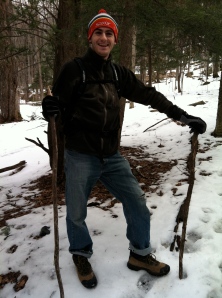 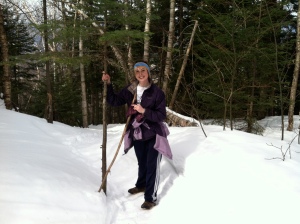 The trail was a lot snowier than we thought though, and there were some locations were I felt pretty unsteady and worried about slipping:

When we finally reached the peak, we had definitely gotten a good workout in. I was sweating a lot! The skies were incredibly clear and it seemed as though we could see across the whole state!

The views were amazing and we were all smiles: 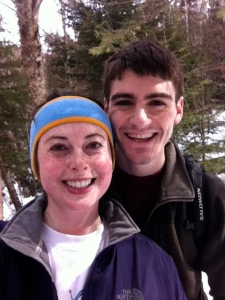 My smile, however, quickly faded as we began our descent. It was so steep and icy, I couldn’t get traction and I kept slipping. I felt very nervous, but luckily Noah was there to help navigate down the mountain. We ended up walking near the trail in deeper snow for almost the whole way down since we had more stability there than on the actual path. In hindsight, this hike would have been better to do when the snow wasn’t on the trail (or at least when the snow wasn’t so slick), but I still enjoyed the hike up the mountain, the views from the top, and the new memories of time in Vermont!

In total, the 4-mile hike took us about 4 hours, giving you an idea of how challenging the trail was!

Even though I don’t actually like traditional pancakes that much, there are few things that conjure the idea of ‘hominess’ more than the thought of a heaping stack of pancakes served with maple syrup. Unless you are of the Aunt Jemima crowd (and why would you be?!), then that maple syrup you are thinking of probably came from Vermont. Why? Because Vermont is the largest producer of maple syrup in the United States. Naturally, my recent visit to Vermont demanded we visit a sugarbush. We went to Morse Farms Maple Sugarworks in Montpelier. 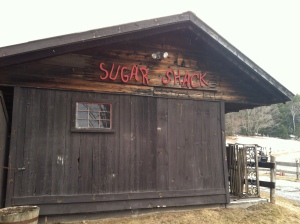 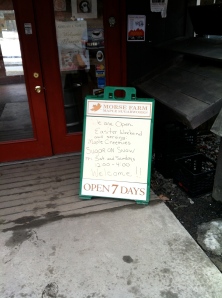 Before going into the main shop, we poked around in the sugar shack.

The syrup production is done in the sugar shack by boiling sap down to syrup. There are different grades of syrup, and the various flavors are achieved through varying boiling times. Look at the difference between the grades of syrup: 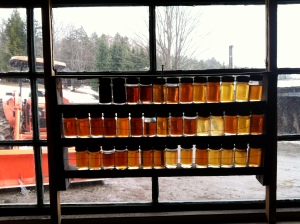 After poking around the sugar shack, we headed into the main shop.There was maple everything! Maple syrup, maple cotton candy, maple fudge, maple t-shirts, maple candy – the list goes on.

I had a sample of maple candy and it was so sweet the little bite made my head spin:

What we really came for though was the sugar on snow. I had never heard of sugar on snow before I started coming to Vermont. For those who, like me, weren’t educated as children about sugar on snow, it is an edible Vermont tradition during the maple syrup harvest season. There are several components to the treat. First, you need the snow:

This is really just shaved ice. Then, you need the maple syrup:

You also get condiments – a pickle and a cider donut:

Once all the pieces are assembled, you pour the syrup over the ‘snow’: 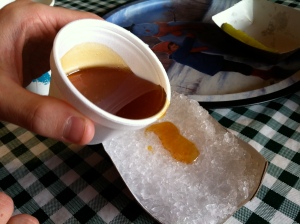 This is when the magic happens. The syrup is warm and the snow is cold – obviously – and the varying temperatures cause the syrup to thicken into a taffy-like form: 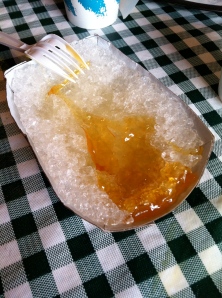 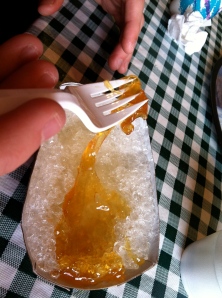 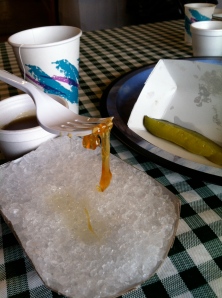 You then eat the maple ‘taffy’ off the fork. As you might imagine, this is INCREDIBLY sweet. Hence, the pickle and cider donut. You are supposed to eat them to balance the sweetness of enjoying your sugar on snow.

I wasn’t up for the sugar overload though, so I just snagged a couple bites of Noah’s and opted to order a different Vermont culinary treat – a creemee. 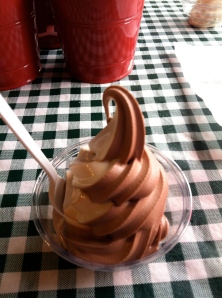 Really, this is just soft-serve ice cream, but since they call it by a different name (creemee) it almost seems like something different. I got a swirl of chocolate and – of course – maple. It was delicious!

In addition to maple syrup, Vermont is also known for cheese. We visited Cabot Creamery for a tour where we learned about how they make the cheese.

Cabot is a co-op, so it’s owned by the farmers who supply the milk which is pretty neat. While we waited for our tour to start, we enjoyed some samples and looked around the gift shop:

To start the tour, we watched a brief video about the history of Cabot Creamery, the cooperative, and their production:

Then, we walked through the hallways of the factory where we could look through big windows into the rooms where the cheese was being made right before our eyes! These are the huge bins that the milk is put in and churned:

Eventually, the whey will separate from the curd. The whey is drained and then the curds are churned until they’re ready to be packed into cheese. The curds go into a machine and don’t reappear until they are miraculously turned into blocks of…

They also have labs where they do quality control, test shelf life, and try to improve their products:

Very cool! If you are going to Vermont, I would say prioritize going to a sugarbush, and if there’s time also check out a cheese house – it’s a unique experience and fun to see how everything is done. And don’t forget….

Although it’s late March and the end of the skiing season, I was hoping to get in at least one cross-country skiing trip while in Vermont. Lucky for me, on my second day here we were able to go to Craftsbury for some skiing. The Craftsbury Nordic Center was very affordable – only $10 for a day pass and $15 for rentals! The snow wasn’t perfect (due to it being a warm day and so late in the season), but it didn’t slow us down too much and we had a great time skiing for about 2 hours.

Outside of being affordable and fun, the facility itself was great to use. There were maps and trail signs everywhere to clearly tell us where we were going: 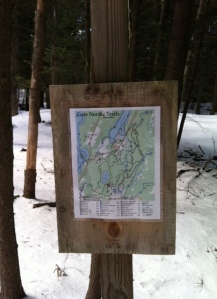 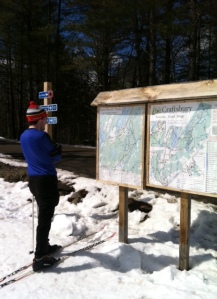 The views were spectacular:

And the trails themselves were nice winding paths through the trees:

What’s not to love about a great day skiing?

Skiing always requires a great lunch to follow. I made a tuna salad to have with toast, spinach, carrots, and hummus. For the tuna salad, I used one small can of tuna packed in water, a few almonds, and a scoop of plain greek yogurt: 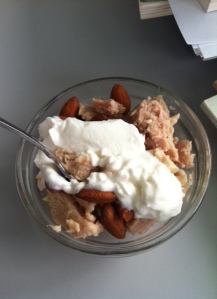 All mixed up and on my sandwich:

Noah stuck with the basics, pb & j with pretzels: 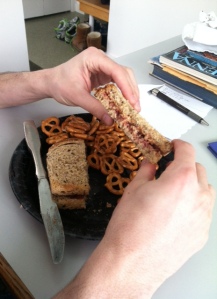 I am currently in Vermont, enjoying the snow/sunshine, maple syrup, and a lovely week of total relaxation. Noah is from Vermont, so we’re here visiting his family. I traveled from MSP to Burlington on Delta, and man oh man, for anyone traveling through the Minneapolis/St Paul airport, you MUST go to Concourse G at Terminal 1. IT IS AMAZING! I’ve never had a flight from that concourse before, but I will be heading straight there from now on no matter where my flight is. First of all…

Seating areas with iPads at every spot. This is not just at some swanky restaurant but at EVERY SEAT in the concourse. Second of all… 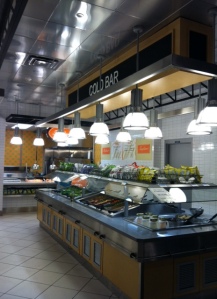 salad, fruit, and hot food bars a la Whole Foods. I was initially sort of skeptical (at an airport?), but a cursory look at the food led me to believe it was of a respectable quality. Third of all (the best for last)…

FROYOAGOGO. Yes, a frozen yogurt bar in the middle of the MSP airport Concourse G. I went a little crazy, as I’m sure all of you are doing right now. Bottom line: I am stoked. Do other airports have this incredible-ness?

Once I got to Burlington, it was nearly 2:00 and I was hungry. The hot/cold bars at the airport had been on my mind all day, so Noah and I decided to go the City Market – Onion River Coop.

Neither of us had been there before, and we both were very impressed. In addition to a wide selection of groceries and produce, there was a fabulous cold bar:

I got a combo of foods from the cold bar:

In the mix: asian slaw, broccoli slaw, curry seitan, maple cabbage/carrots, and fruit salad. Everything was great. I really enjoy the taste of seitan and other wheat based faux-meats, but they always make me feel really full afterwards – almost like they get denser in my stomach. Does this happen to anyone else?

Noah got a sandwich from the sandwich bar (which offered various cold, grilled, and do-it-yourself options): 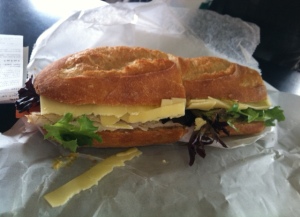 Yum. yum. After lunch, we did the quick 45 minute drive from Burlington to Montpelier. As luck would have it, we needed to do some grocery shopping for the house, so we ended up visiting the Hunger Mountain Coop in Montpelier as well!

Another great coop! When we walked in the door, we were immediately met with a colorful display of organic fruit and vegetables: 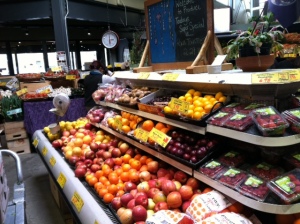 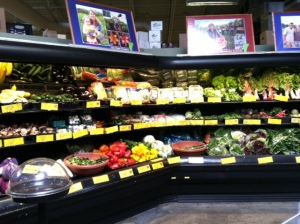 Their hot and cold bars are smaller than the ones at the City Market Co-op in Burlington, but there was still enough to make me want to get lunch here sometime. They also offer hot and cold sandwiches as well as wraps and burritos. Starting my trip with these two beautiful co-ops got even more excited for my week in Vermont and enjoying all the great food and fun it has to offer!