Last week, I used two items from the March Bestowed package. The first was the quinoa and lentil soup mix.

Making the soup was incredibly easy. All you do is combine the package contents with 2 cups of water in a sauce pan and cook for about 15 minutes, stirring constantly:

When it’s finished, the soup will be pretty thick – there wasn’t a ton of ‘broth.’ I served over spinach and added some black beans and almonds: 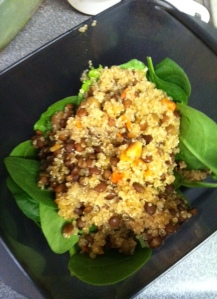 As you can see, it’s not very soup-like, but I thought it was delicious and very flavorful. It would definitely be a good pantry item to have on hand for a quick, nutritious meal.

The second March Bestowed item I used was the happy squeeze smoothie.

Instead of drinking it straight, I combined it with yogurt and cereal for breakfast.

I refrigerated the mixture overnight and then ate it in the morning, topped with some granola and almond milk:

The smoothie added a nice fruity taste to the breakfast, but I don’t think I would have liked drinking it straight – that’s more of a personal preference than due to the taste though.

As always, I enjoyed trying all of the Bestowed products!

In other news…Noah and I also tried Tilia last week. 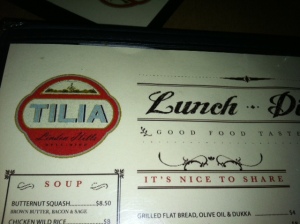 We’ve been wanting to try Tilia for a while but have been intimidated to go on a weekend since there always seem to be a really long line (we also took this as an indication that the food would be good). We decided to go on Monday night, and that strategy worked since we didn’t wait for a table at all. Unfortunately, the restaurant was extremely dark and I felt bad using my flash, so I don’t have any pictures….but I will tell you about the food!

To start, I had a spinach salad that came with mushrooms, soft-boiled egg, and parmesan. Noah had flat bread that was served with olive oil and dukka (a mix of middle-eastern spices) to dip in.

For our entrees, I ordered a turkey burger and Noah had Grilled Bison New York Strip. I didn’t try the bison, but Noah said it tasted great. As to the burger – GREAT! The meat was really juicy, and the grilled onions on top added a great flavor. I would have liked some regular lettuce and tomato on there too, but that might have been a little too basic for this sort of establishment. 🙂

We splurged for dessert, and Noah got a butterscotch brûlée while I ordered chocolate cake that came with peanut butter and banana sauce.

Overall, everything was great. The restaurant was also very affordable for the quality of food. It’s a nice enough place though that it seems like you’re supposed to order more than one dish per person, so that brings the bill up fast. That said, I think this is better for a longer, more formal meal rather than a quick bite out. I will keep it in mind for out-of-town guests and celebrations. Bonus: they use many local ingredients!