Last week was full of great entertainment for me here in Jerusalem- woohoo!

Here is a quick recap of the highlights:

Idan Raichel is an Israeli musician who’s been somewhat of a cultural/national icon for many years. He performs with a group called the Idan Raichel project, and the music is a blend of Middle Eastern sounds. The Jerusalem International Convention Center is in the north of the city near to the Central Bus Station, and it was a huge building with lots of interesting artwork that I hope to have more time to look at in the future. People streaming in for the concert: 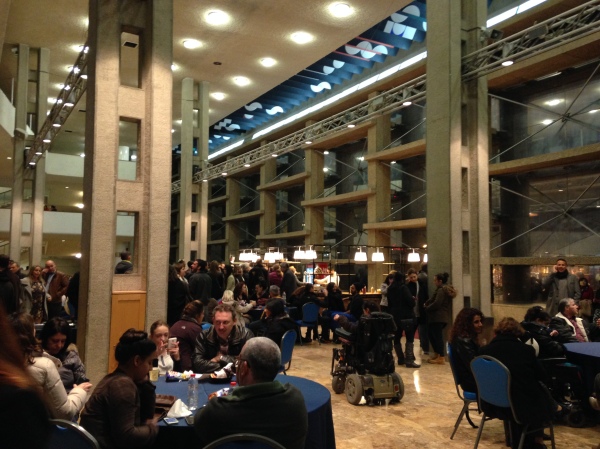 The concert was awesome. Something that I liked was that Idan Raichel wasn’t at all centerstage the whole time – primarily he sat to the side of the stage on the piano and other members of the group took a central focus:

If you have the opportunity, I would definitely recommend seeing the Idan Raichel Project in concert! (if you want to check out some of his most famous songs, look here, here, or here!)

On Friday night, Noah and I had a group of people we play basketball with over for Shabbat dinner. Since we are united by basketball, it seemed appropriate to give the dinner a ‘balls’ theme – ie, food in the shape of balls! It was a lot of fun and – needless to say – hilarious. The menu included lentil balls, meatballs, cherry tomatoes, small potatoes, and rice with peas:

Imagine if Disney World and Times Square had a baby…okay, got it?!

That’s Cinema City in Jerusalem! Noah and I had heard about this movie theater/mall/phenomenon since coming to Israel, and it is truly quite an experience. We decided to go there for a movie and dinner this past Motzei Shabbat (after the end of Shabbat on Saturday night), and it was pretty impressive! In these pictures, the place is just coming alive because Shabbat recently ended: 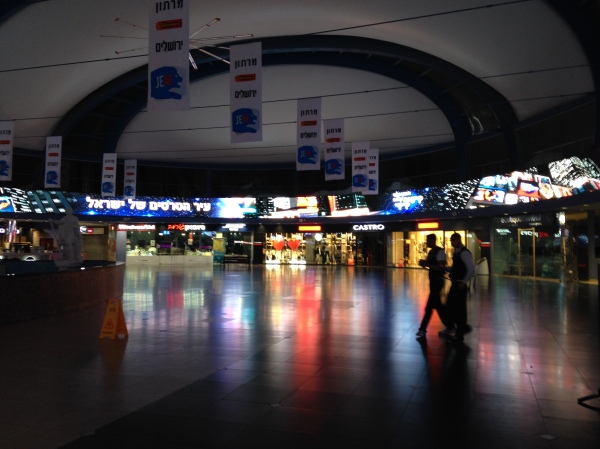 Something you don’t see everyday… 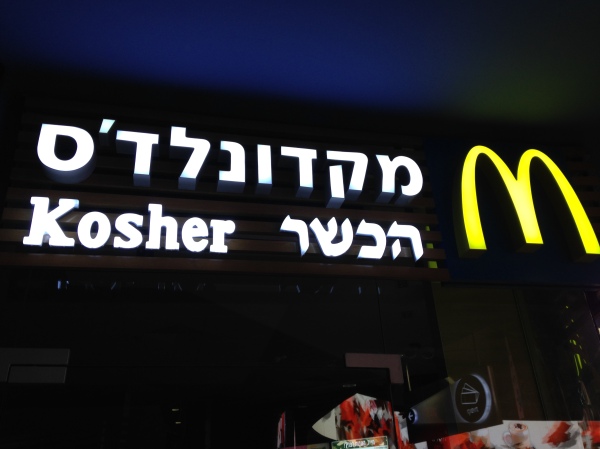 When you walk in, the upper level is where you can buy tickets and there is a mall of sorts with lots of shops and restaurants. Then, there is a lower level with theaters and an impressive concessions stand (serving Ben and Jerry’s ice cream!):

We saw the movie American Sniper (in English, Hebrew subtitles): 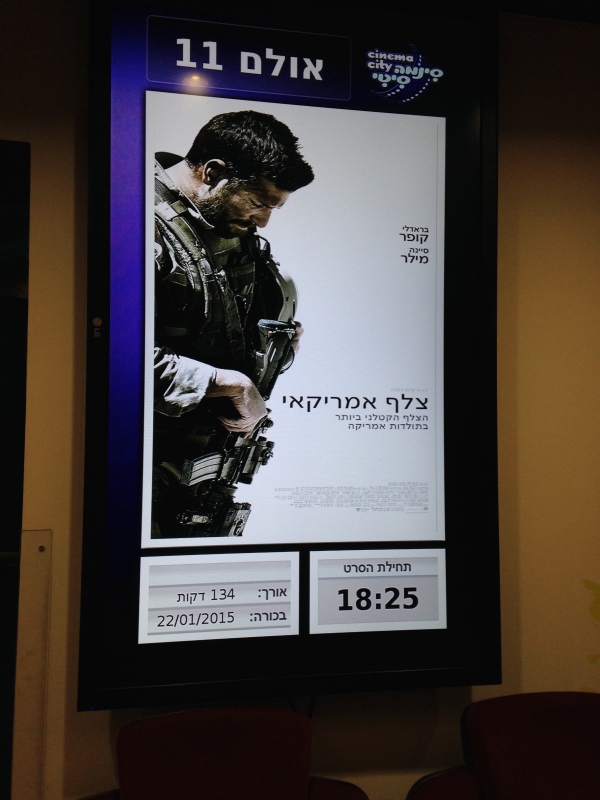 I thought the movie was very good, although the intense content of the film left me feeling somewhat on edge afterwards. If you want to see something lighter, they are also showing 50 Shades currently… 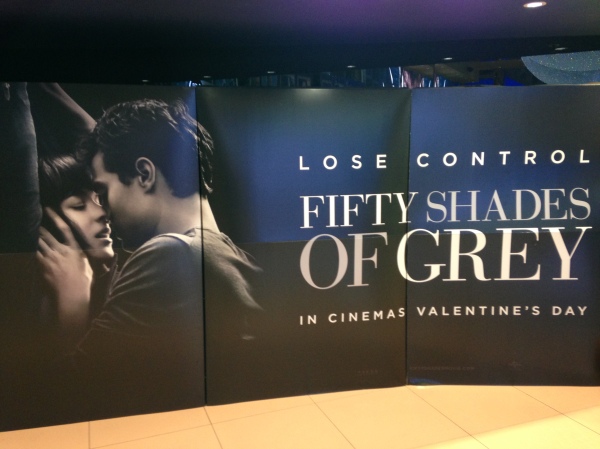 ‘Days of Togetherness’ is super cheesy but also amazingly fun. I first read about the idea on Carrots ‘N’ Cake, and I thought it sounded super cute/nice. Noah and I did it last year, and we decided to do it again this year! Carrot does it for 24 days leading up to Christmas, but we’ve done it pretty much whenever seems like a good time! Here’s how it works…

– choose a number of days (we’re doing 28 this year) and think of that number of activities that you would like to do with your partner
– write each activity on a separate slip of paper
– put all of the papers in a container of sorts
– every day, draw and activity and do it!
super easy. super fun.

So far, we have drawn the following activities: write a note, send a snapchat of a mystery item, play Dominion, play a game (unspecified), and find a recipe for the other person to make for dinner this week.

And…I’m actually just about to go on a walk for today’s activity so, bye. 🙂

The Jerusalem Cinematheque is a movie theater and arts venue just a few minutes walk west of the Old City walls.

Last week, Noah and I went to the Cinematheque to see an origami exhibit as part of Jerusalem’s week long Japanese festival. 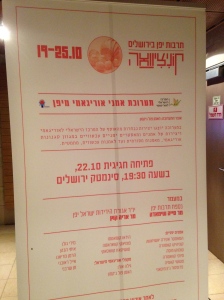 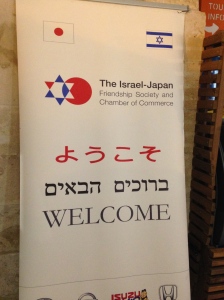 The exhibit has some pretty amazing origami figures: 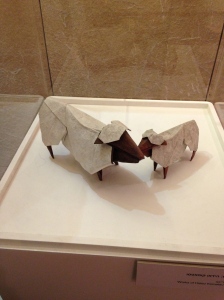 For the event, they were also handing out free samples of sake and ‘origami-ed’ vegetables: 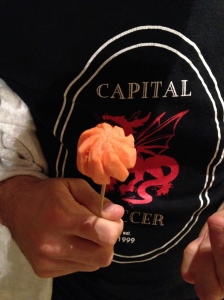 While at the Cinematheque for the origami exhibit, we bought tickets for the following week to see the movie Boyhood. When we returned a few days ago for the movie, we got there a little early to get drinks at the small food kiosk at the theater:

WARNING: you can’t bring food and beverage into the theater, so if you get a snack or drink, make sure to leave plenty of time to finish before the movie starts!

The theater itself was clean and comfortable…although the chairs were a little step down from the couch-like chairs at fancy theaters I’ve been to in the U.S!

The movie was in English with Hebrew subtitles. Boyhood is a really unique movie. It was filmed over a period of 12 years, using the same actors to depict a family growing and changing over time. The main character, Mason, starts the movie as a six year old, and the movie ends when he is 18 and just starting college. Despite having been filmed in segments over a number of years, the flow of the movie worked great, and the transitions between each time period felt totally natural. The main themes of the movie dealt with social conditioning, personal connection and relationships, and how beauty and love can exist even in times of hardship. I thought the film was incredibly realistic and touching, and I’ve continued to think about it over the last couple days since seeing it…definitely a sign of a good movie! I would definitely recommend going to see it if you have the chance! I’m glad the Cinematheque offers films in English, and I definitely hope to go to more movies there over the course of the year.

4th of July is one of my favorite holidays. That and Thanksgiving. I guess I’m a serious American, huh?

The holiday actually started for me this year the night before on the 3rd at the Red, White, and Boom. RWandB is a 2 day festival hosted by Minneapolis Parks and Rec at Nicollet Island that includes music, food, fireworks, races, and an outdoor movie. On Fourth of July Eve (yes, that’s a thing now), the outdoor movie was hosted. Look at this crowd:

Who would expect anything less for a screening of the most patriotic movie of the 80’s:

After a fun night of jingoism, we awoke the next morning ready to get our parade on (nothing says Fourth of July like parades, right?). St. Anthony Park in St. Paul offers a parade and festival that we decided to attend. 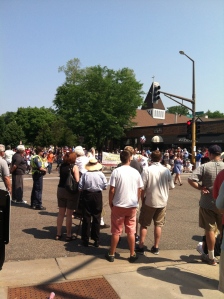 Lots of people lined the streets of Como Ave to see the parade. 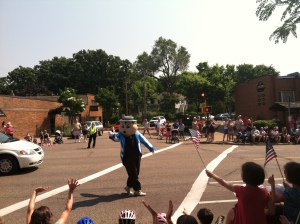 The boy scouts definitely had the coolest float:

Someone forgot to mention to this float that today is all about AMERI-CUH: 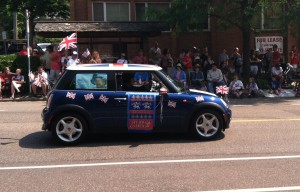 After the parade passed, everyone followed the floats to the parade end at Langford Park: 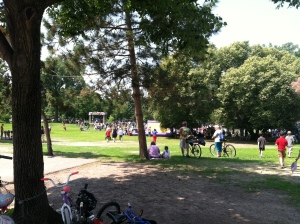 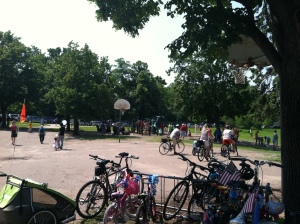 After getting to the park. We had to do some dog and car watching:

The park was packed with folks having picnics and enjoying our freedom in the sunshine: 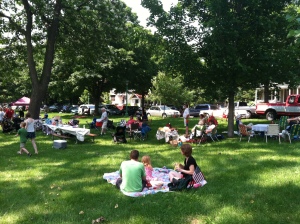 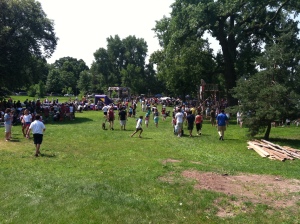 For lunch, we left the park and headed to the nearby Finnish Bistro. As adorable as always, the bistro was a bit more crowded on this visit. We ordered a cold salmon salad and veggie omelet:

Delish! After eating, we headed back to the park to see the boy scouts continuing their antics: 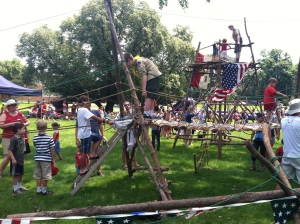 We also listened to some jazz music at the bandstand:

Once the festivities had been thoroughly explored, it was time to head home for a BBQ that my roommates and I hosted in our backyard. The food was awesome: 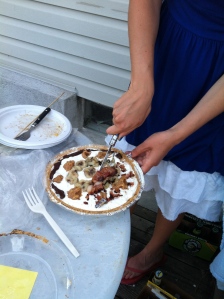 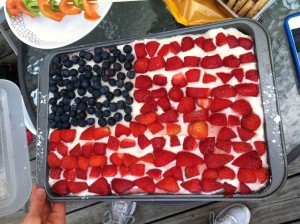 Of course, no 4th of July is complete without fireworks. We biked to the Stonearch Bridge to watch fireworks there. Undoubtedly this is the most crowded spot in Minneapolis to watch the fireworks, but it was totally worth it. There were HUNDREDS (thousands?) of people, and the fireworks display was great. 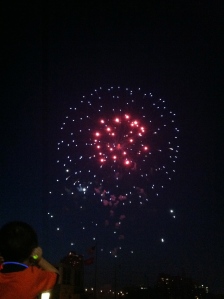 Happy Birthday America. I ❤ you. 🙂

The riverfront district of St. Anthony on the east side of the Stone Arch Bridge is gorgeous. If you haven’t been so, I suggest going there. Like right now. There are restaurants, cobblestone streets, and the iconic flashing lights of Minneapolis’ most historic theatre (perhaps rivaled by the Uptown…): St. Anthony Main Theatre.

This no frills theatre is affordable, cozy, and offers a glimpse into a slightly older version of movie going (read: the chairs are just chairs – not kooshy beds as in some of the newer theaters!).

Tickets are $6 for students, $8.50 for adults, and $5 for everyone on Tuesdays. Tuesdays also offer a $2 medium popcorn deal! 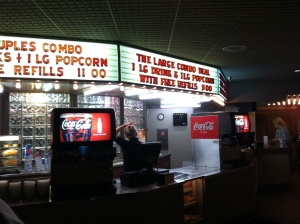 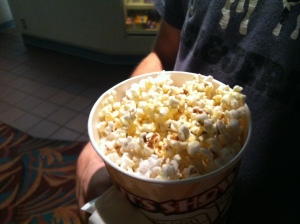 Noah and I have been to see two movies here in the last couple weeks: This is the End and Monsters U.

This is the End was completely not what I expected. I hadn’t watched a trailer or anything, so expecting the typical slightly crude humor of a comedy-kings movie from our day. Instead…it was scary! Admittedly, still hilarious, but it was scary! I would recommend it if you don’t mind some gore and blasphemy. Monsters U couldn’t hold a candle to the original Monsters, Inc., but I’m sure no one really expected it to. It was still entertaining and some funny scenes.

I’ll hopefully be headed back for another movie soon, but it’s still a few months until the movie I’ve really been waiting for… 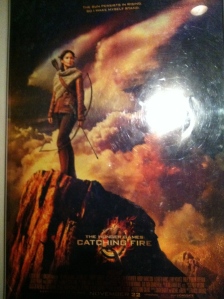