It’s official. I have found one of the top date activities in Minneapolis. Last weekend, Noah and I took a class through Kitchen in the Market. Kitchen in the Market is located in the Midtown Global Market, and the space is a shared commercial kitchen for food trucks, caterers, and others looking for space to create delicious food. In addition to being a shared kitchen, Kitchen in the Market also offers a variety of classes and events. 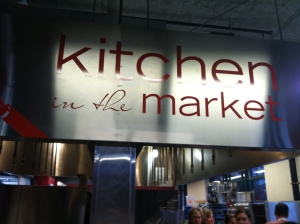 After finding our way to the kitchen, the evening began with a cheese tasting led by the owner of Grassroots Gourmet – dairy and meat shop in the Global Market. 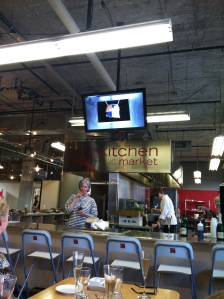 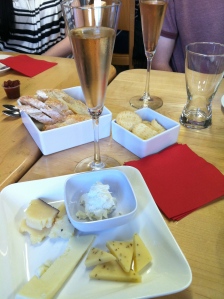 My favorite cheese was a chevre – especially when combined with tomato chutney or honey! 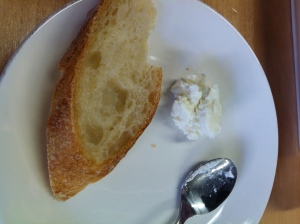 After the cheese tasting, we went on a tour of the Global Market. The class we took was called ‘Cooking in the Market,’ and the idea was that we would decide what to make simply based on what looked good walking around the various vendors. After touring the market, we would discuss with the professional chefs what ingredients we were interesting in using, and then – with their guidance – create a dish.

There were about 20 people in the class, and we were broken up into group of 4 to decide what to make. Our group decided that we wanted to make something with chicken and Mexican spices. The suggestion from the pro chefs? Empanadas! The part of the class where each group decided what to make was one of the most fun parts (besides all of it). Each group would tell the head chef a certain meat, spice, ingredient, cooking style, or ethnic cuisine they were interested in. The chef would ask a few questions and then settle on a specific dish, give that group a shopping list, and send them on their way. Each group had $25 to spend on the ingredients for their item. After buying the ingredients, each group was paired with one of the professional chefs to help oversee the actual cooking.

Aprons on and ready to cook: 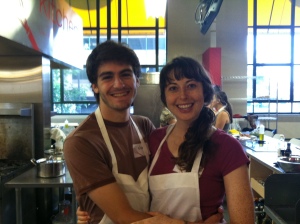 To start, we needed to make a pie dough for the empanada casing. We made that first so it would have some time to chill in the refrigerator while we made the filling. For the pie dough, we needed butter, flour, sugar, a few pinches of salt, and a little water:

After the pie dough was done and in the fridge, we set to work on the filling. Supplies included: chicken, potatoes, jalapenos, cilantro, cumin, and oregano:

We chopped up three potatoes and then boiled for about 10 minutes: 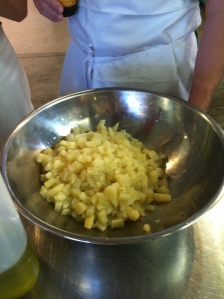 We covered 4 chicken breasts with some oil, cumin, and oregano and baked at 400° for about 10 minutes:

For the jalapenos, we fire roasted them over a stove burner until the outsides were thoroughly crisped, and then sealed inside a bowl with saran wrap to let the skins soften: 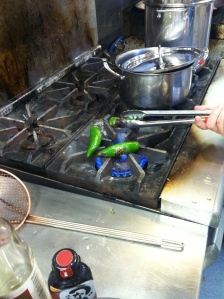 After a few minutes in the bowl, the skins will slide right off the peppers, giving them a nice ‘fire-roasted’ flavor and making it easy to chop:

Add the diced jalapeno and diced chicken to the boiled potatoes:

Chop the leaves from a full bunch of cilantro and add that to the mix as well: 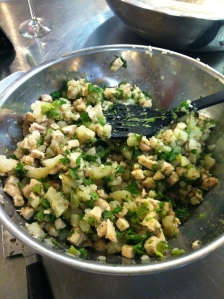 While I was involved with all of this chopping, some of the other group members worked on a tomatillo salsa: 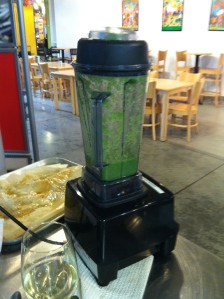 At this point, it was time to get the pie dough from the fridge, roll it out, and shape it into small circles for the empanada shells:

We added a small amount of filling to each shell, folding it over, marked the edges with a fork, and brushed it with olive oil: 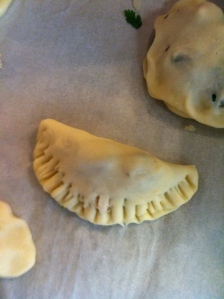 Once the empanadas were in the oven, it was time to walk around and see what the other groups were up to!

There was veggie paella:

Thai fried rice – given a fusion twist with wild rice, coconut, and peaches: 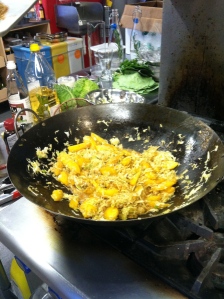 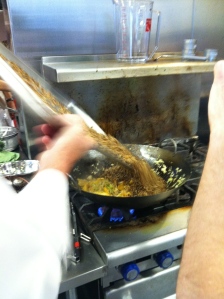 Lamb ribs with a plum sauce: 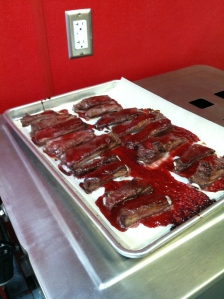 And a sweet couscous with radishes, carrots, and raisins: 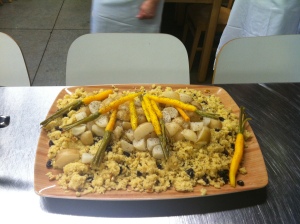 After all this poking around, I was ready to eat! Luckily, the empanadas were just coming out the oven, so we arranged them on a plate around the leftover filling (there was a lot!): 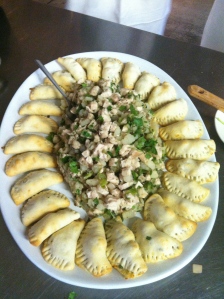 By this time, everyone had gotten a glimpse of all the other groups’ dishes and was seriously ready to chow down. We set the food up on the main counter, buffet-style: 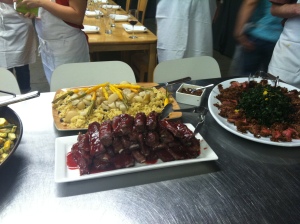 The tables were set beautifully with rosemary-infused water:

After another brief description from each group about how they prepared their dish, it was time to get food! 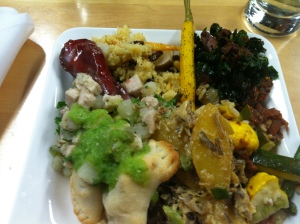 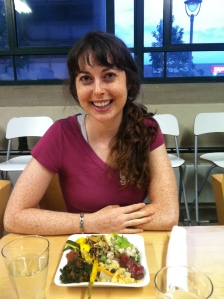 Everything was DELICIOUS! My favorites were probably the empanadas (although I might have been a little biased there!), the kale salad, and the couscous. I liked the goat a lot more than I thought I would, but I was a fan of the lamb ribs. They were a little too chewy for me.

This whole experience was without a doubt one of the most fun things I’ve done all summer. This would be an awesome date for a special occasion (or just for fun!), and it would also be a great thing to do with girlfriends or family member. I wish I could go every week! My advice to you: sign up sign up sign up now. You will have an amazing time. 🙂