This past Rosh Hodesh (Rosh Hodesh Iyar), Noah and I went to the kotel (the Western Wall) for a Rosh Hodesh service. Rosh Hodesh = literally, head of the month, refers to the beginning of a new month in the Hebrew calendar.

Yes, in theory it would be nice to attend a Rosh Hodesh service at the kotel for any reason, but we were going with the particular aim to participate in and support Women of the Wall. For those who are not familiar with the political situation at the kotel, here’s the break down:

The kotel is divided into a men’s section and a women’s section, divided by a mechitza (a partition used to separate the two genders, customary at Orthodox prayer services). While many people who go to the kotel do not necessarily feel the need for a mechitza and are not necessarily members of communities that use a mechitza as general practice (including myself), the mechitza is generally accepted as a reasonable standard at the kotel to make it accessible to the most number of Jews possible. YET, the mechitza has enabled the development of discriminatory practices against women and their ability to worship freely at the kotel. For example, it is illegal to bring a Torah into the area of the kotel (for all genders in any circumstances). For men, however, this poses no problem because there are over 100 Torahs at the kotel for public use. BUT, all of the Torahs are kept on the mens side – not a single one on the women’s side. Traditionally, women do not read Torah, receive aliyot (recitation of the blessings before and after Torah readings), or lead services, and the set up at the kotel reinforces these traditional restrictions. YET, all Reform and Conservative as well as a growing number of Orthodox communities have adapted this traditional practice to be more welcoming towards women and their full participation in services and Torah leading. Thus, there are MANY, MANY women who regularly participate in and read at Torah services, but they are not able to do so at the kotel. WHY, then, you may ask, do women not have access to Torah at the kotel? Answer: The ultra-Orthodox (haredim) have political control over this area and they maintain the status quo.

Women of the Wall is a group that fights for Jewish women all around the world to be able to worship fully and equally at the kotel. Their hallmark event is a monthly Rosh Hodesh service at the kotel where they hold a complete service led by and participated in by women – including, to whatever extent is possible, a Torah reading. Prior to the first of Iyar a few weeks ago, the group (which has existed since 1988) has never successfully been able to read from a full size Torah scroll at the kotel. Full size scrolls had always been confiscated in the past, although there were successful instances of bringing in mini-scrolls.

So now that you know the background…

Noah and I headed to the Old City for Rosh Hodesh Iyar: 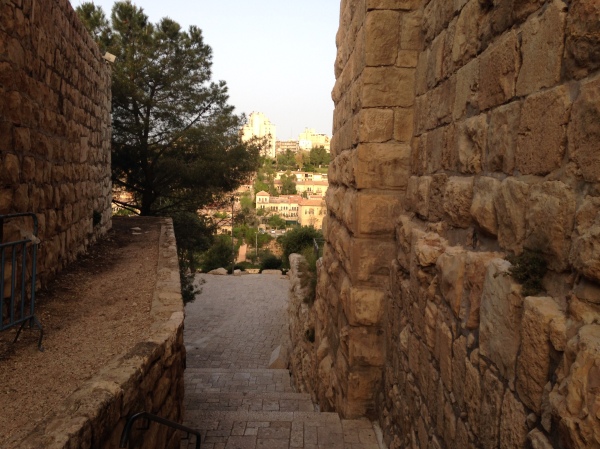 The service went smoothly and interrupted for all of Pesukei DeZimra and Shacharit, but then it was time for the Torah service…

A male supporter (of whom there are many) got a Torah from the men’s side of the mechitza and handed it to the women by quickly opening up a space in the partition. The partition was quickly closed (and the man was thrown to the ground and injured by an angry ultra-Orthodox man).

Full size Torah in the women’s side – check! Celebration ensues: 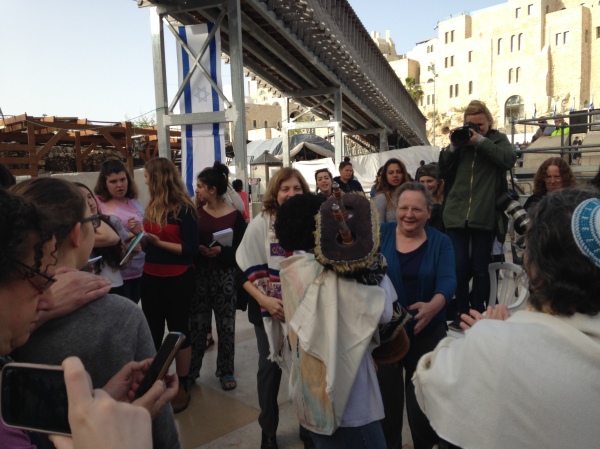 Meanwhile, one of the group leaders prepared the table to open the Torah scroll and read:

As these events transpired, more and more ultra-Orthodox men were standing on chairs and looking over from the other side of the mechitza (there are also many Women of the Wall male supporters standing and looking over from the side and the back – where Noah was). When the Torah was opened and started to be read, a few ultra-Orthodox men opened the mechitza and tried to push their way into the crowd of women and take the Torah back. One of them was yelling, “zeh sefer sheli!” (this is my book!). The women reading tried to continue as naturally as possible while some of the male supporters tried to create physical blocks to prevent the ultra-Orthodox men from reaching the women. Other women tried to scare the men away by getting close to them and yelling, “I’m a woman! I’m a woman!” – utilizing the ultra-Orthodox practice of not looking at or touching women that they are not married to. Look at the center left in the photos below to see where the main action is happening: 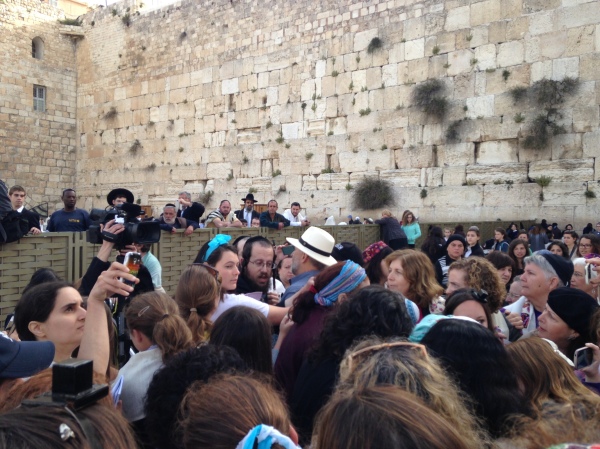 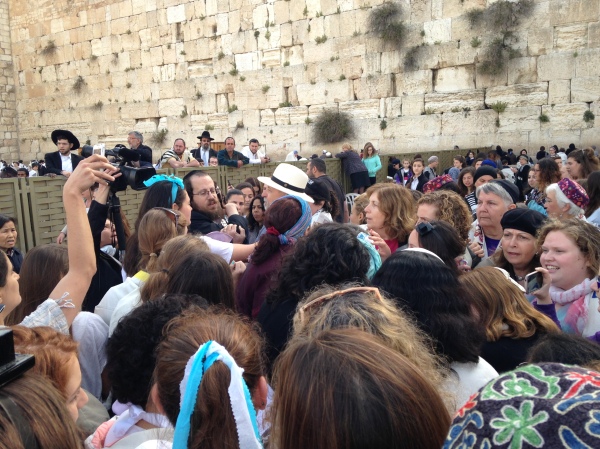 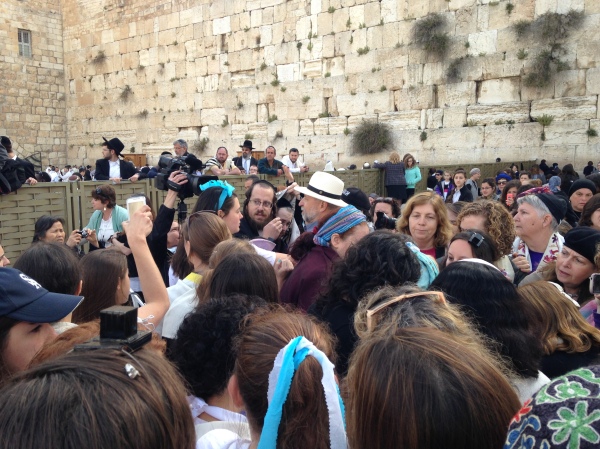 After some tense moments and an overall joyous Torah reading, it was time to wrap the scroll back up! 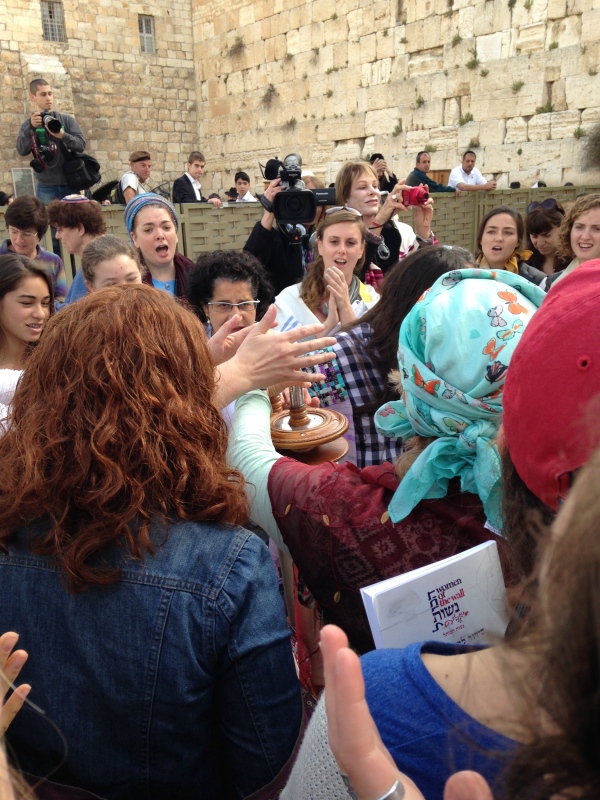 It was a shehecheyanu moment (a prayer said to celebrate special occasions – particularly something happening for the first time): 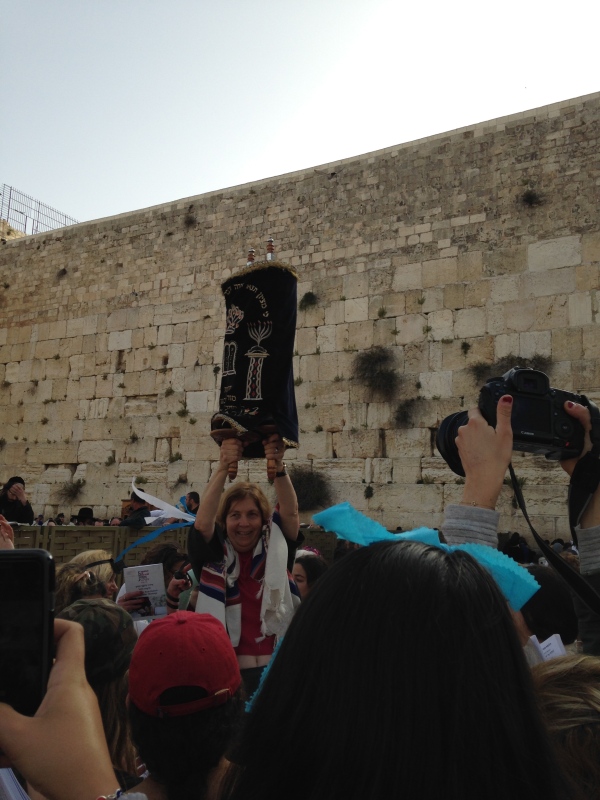 Who knows what will happen at the next Rosh Hodesh Women of the Wall service (which is coming up on May 19th). I’m not sure if I will attend, but either way I suggest you check the news afterwards! For a write-up in the Times of Israel about the historic reading outlined above, see here.

2 thoughts on “Women of the Wall: a historic Torah reading”