My last post gave a recap of the first two holidays in the period of the Yamim in Israel: Yom HaShoah and Yom HaZikaron. The holiday that concludes the 10-day period of the Yamim is Yom HaAtzmaut – Israel’s independence day. The first 8-days of the Yamim – from Yom HaShoah to Yom HaZikaron – are incredibly sad, and the sorrow associated with these days seems to accumulate into one national day of enormous grief on Yom HaZikaron. How abrupt, then, it seems when the sun sets on Yom HaZikaron and the transition to Yom HaAtzmaut is immediate. Mourning turns into celebration, and the streets are filled with parties, dancing, and huge inflatable hammers (an odd holiday tradition). In line with the rest of Yom HaZikaron, the transition from sadness to joy is marked with a tekes (ceremony). The tekes Noah and I attended was at the Tahana Rishona, and the ceremony was led by a group of reform rabbis, interspersing prayer with song, readings, and stories. 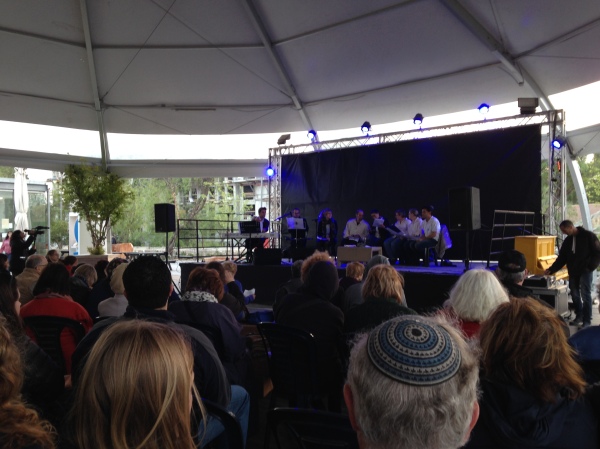 The tekes ended after the sun had set (and, thus, the next day – Yom HaAtzmaut – had begun), and Noah and I hit the streets with a few friends: 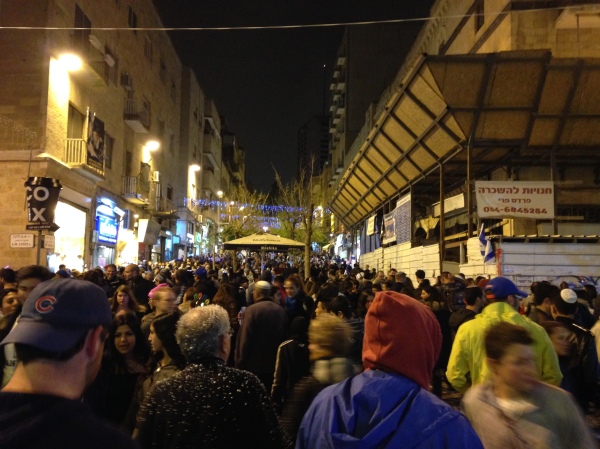 I wasn’t kidding about everyone being on the streets to celebrate! I thought Purim was a big party, but that was seriously nothing compared to Yom HaAtzmaut.

Near Ben Yehuda street, we stumbled upon a huge rave of sorts with a ton of people smushed together dancing to a DJ: 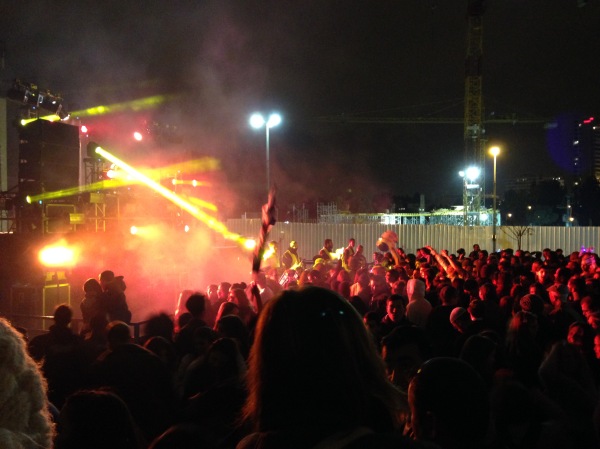 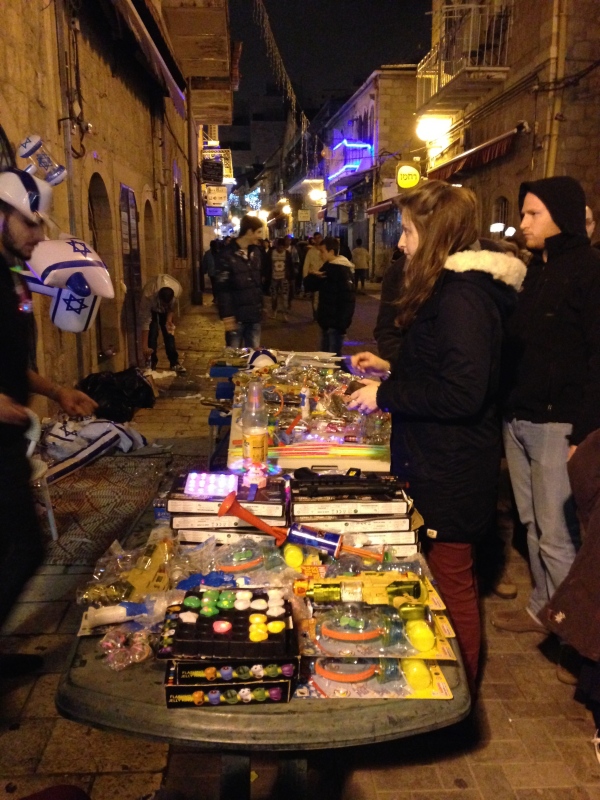 Noah and I bought an Israeli flag cowboy hat: 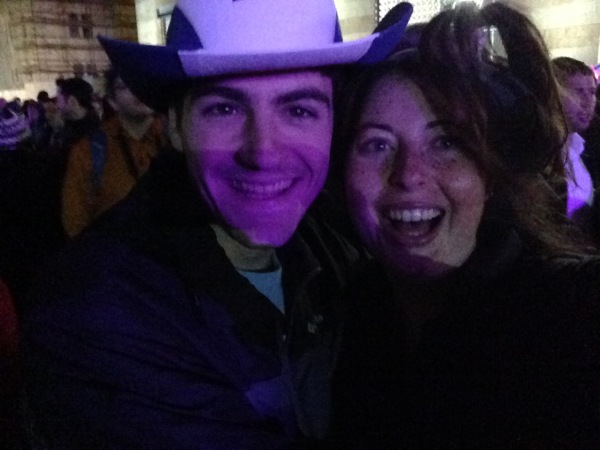 Most of the people in the streets were wearing some sort of Israel swag and/or carrying flags, and it was fun to see some of the more clever outfits…are you rooting for this team yet? 🙂 : 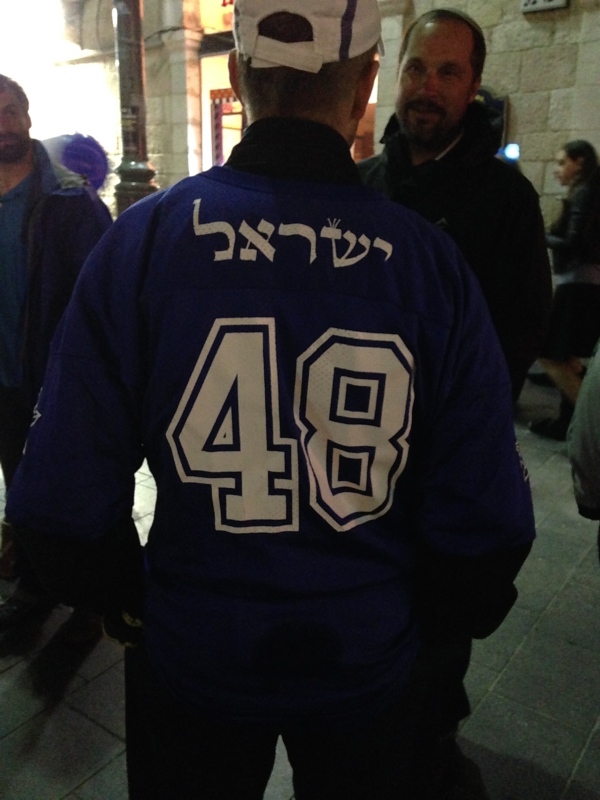 After spending a while in the Ben Yehuda area, we made our way to Safra Square where there was another large crowd of people (basically everywhere was just one continuous large crowd with some even larger crowds collected in some areas…) : 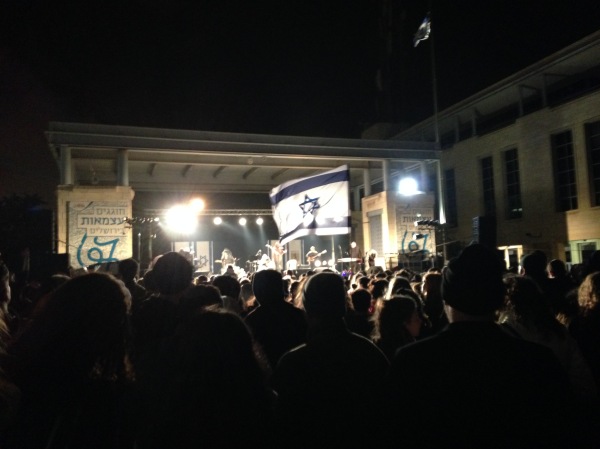 Safra Square had a line-up of several bands playing all night, and people were collected there from about 9pm-3am dancing and listening to music.

At midnight, there was a fireworks show that we watched from Gan HaAtzmaut (Independence Park): 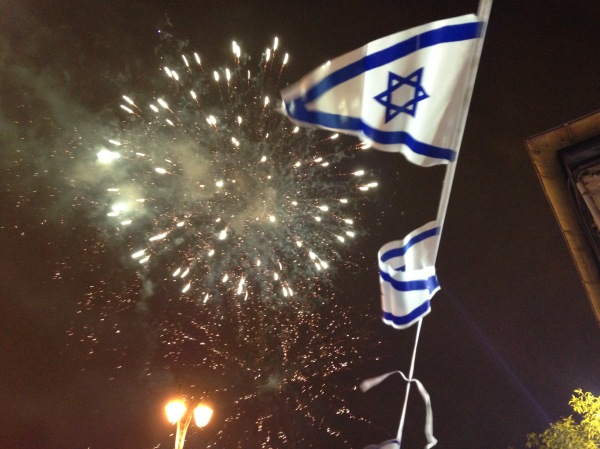 Noah and I were back home a little before 2am – which would be considered early by most! This is definitely a night for celebration!

When we woke up in the morning for Yom HaAtzmaut day, we had plans to celebrate the holiday in typical Israeli fashion: with a BBQ. We have a friend from college who is from Israel, and some of his extended family lives on a moshav about an hour from Jerusalem. They host an annual Yom HaAtzmaut BBQ, and our friend invited us. There was no messing around at this BBQ – there was freshly cooked and deliciously seasoned meat as well as a large selection of salads and sides: 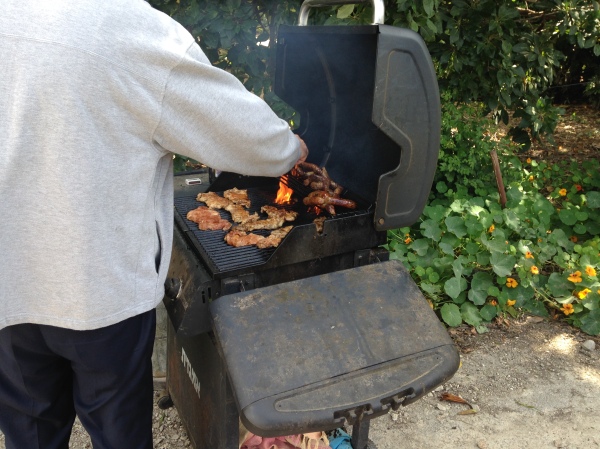 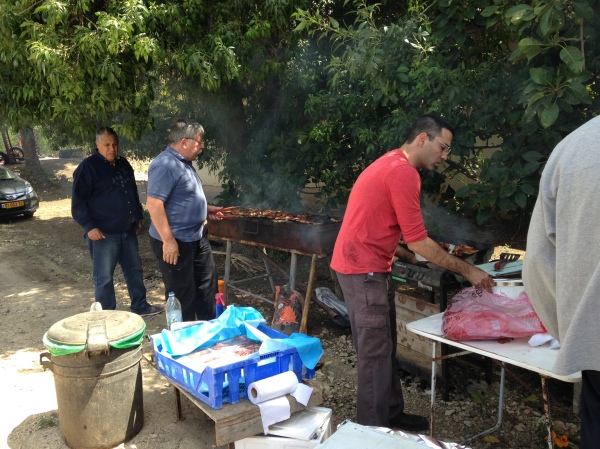 It was quite the feast!

One small anecdote that I think highlights the cultural pervasiveness and celebration connected with this holiday: in the days leading up to Yom HaAtzmaut, during the Yamim and even a bit before, Israeli flags started appearing everywhere – literally, everywhere. Buildings had flags from their balconies, windows, and along their sides: 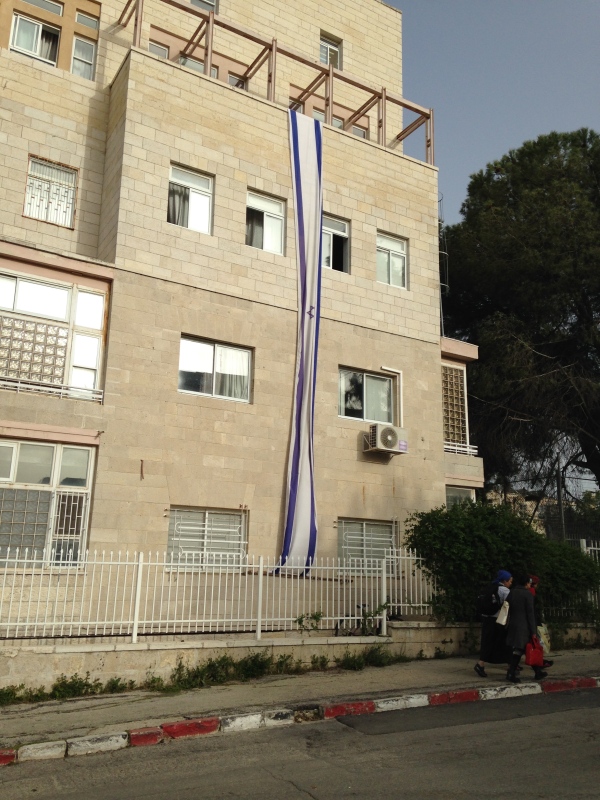 And many of the cars on the roads had flags attached to their windows: 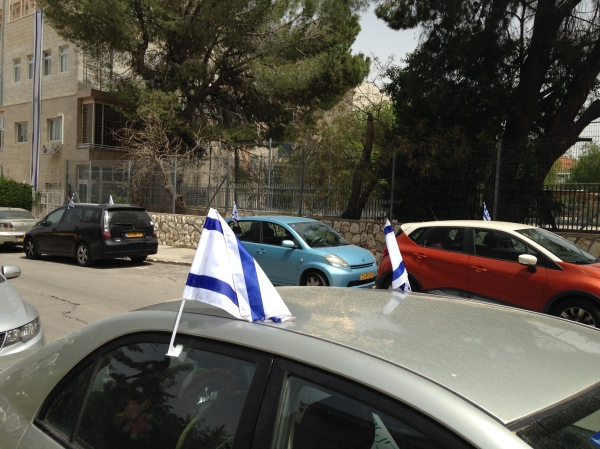 I even saw some cars with Israeli flag covers attached to the back of their side mirrors!

In some ways, it was odd how quickly and completely the transition from Yom HaZikaron to Yom HaAtzmaut happened, and some people have told me that for families who have lost someone close/recently, it can be very psychologically difficult to feel that they need to make the transition so abruptly. At the same time, it was incredible to see what this holiday means to Israelis and what the celebration looks like here. Don’t get me wrong, I love a good 4th of July parade and BBQ, but the atmosphere in America on 4th of July is nothing compared to the feeling of complete euphoria that fills the Israeli streets on Yom HaAtzmaut. Maybe it’s a being-a-new(ish)-country thing, maybe it’s a is-my-future-secure(?) thing, maybe it’s a people-die-for-this-country-all-the-time-so-we-might-as-well-celebrate thing…I’m not sure. But I can definitely say that this was one of my absolute favorite days in Israel this year and I hope I can be in this country for the holiday in the future. 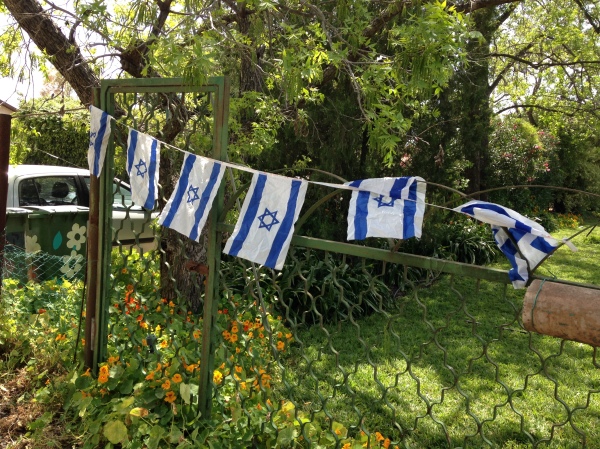 See my post on Yom HaShoah and Yom HaZikaron here.

One thought on “Yom HaAtzmaut in Jerusalem”