My Heritage Seminars group woke up in Lublin after our second night in Poland. We spent the first part of the morning exploring some of Lublin’s sites. First, we went to the Old Jewish Cemetery of Lublin: 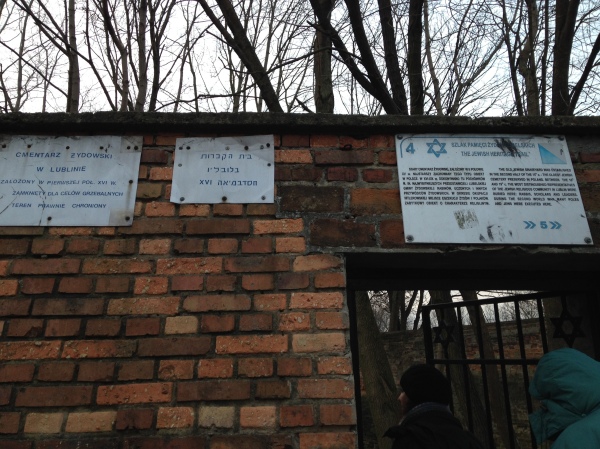 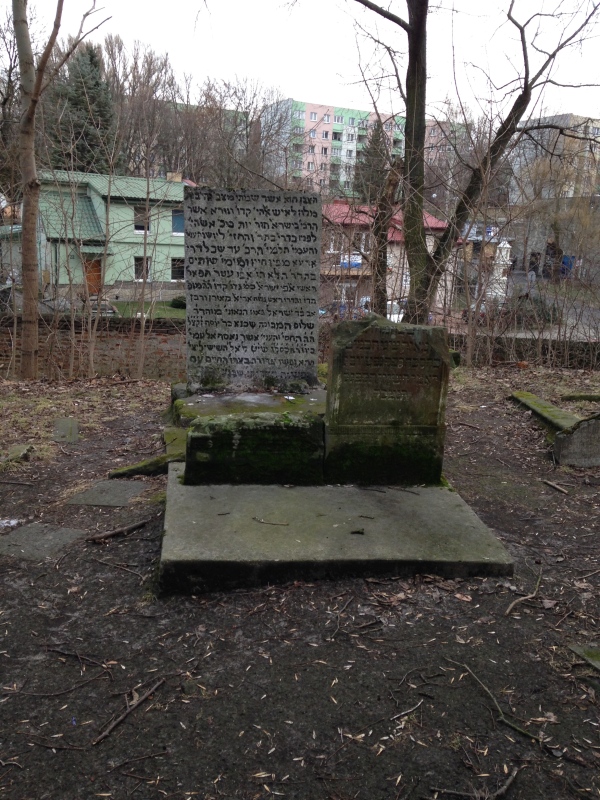 The cemetery was situated just off some roads and residential areas, so it made for an odd juxtaposition to be in the very old (and mostly destroyed) cemetery but also to be able to look out and see normal life so nearby. Something that was emphasized repeatedly on the trip was how the Nazi’s war against the Jews was much more than a physical war – it was also a mental and emotional war. One of the most striking examples of this was that when Jewish cemeteries were destroyed during the war, the tombstones were often taken and then used to pave the roads in the concentration camps where Jews were kept prisoner. Using Jewish gravestones to pave roads was intended to feel belittling and dehumanizing.

Majdanek was the first concentration camp to become a museum and commemoration site – established as such in 1944. One of the unusual things about Majdanek (and perhaps coincidentally the reason for its speedy commemoration) is that it had a high percentage of Polish political prisoners who labored there. The camp first started operating in late 1941, and it was originally opened to be a labor camp for Soviet Prisoners of War. This purpose evolved to include many Polish political prisoners and also Jews. One of the unique features about Majdanek is that – unlike many other camps – it is not in an isolated area. In fact, it is within the boundaries of Lublin. Today, it is right next to some busy roads and residential areas. It was crazy to imagine the people living there giving directions to their house, “okay, so you drive straight past Majdanek and then turn left…”

The camp today includes a combination of commemorative art, restored barracks and other buildings, and a museum. At the entrance to the camp is this distinctive piece of commemorative art – to approach the sculpture one must go down into a narrow arrow with jagged stones coming in from all sides.: 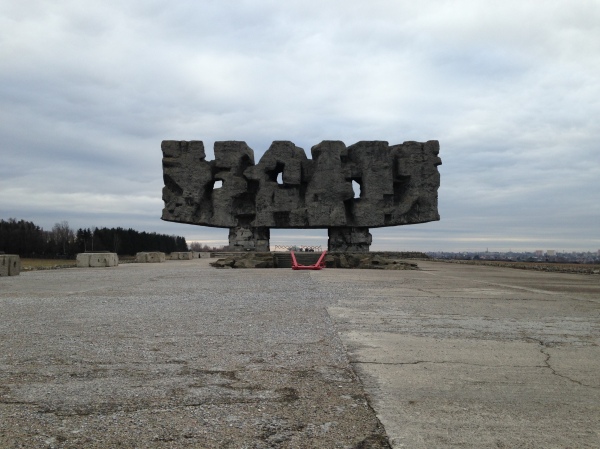 Approaching it really gives the impression of walking towards an ever-increasing peril with no escape – the artist did a good job relaying the message! Looking out at the fields of Majdanek, I was immediately struck by how vast the camp was. Compared to the relatively small area of Treblinka, it was abundantly clear that a camp needed to be much larger if people were there to work rather than only to die.

We entered the camp through the same gate at which men and women were separated after arriving to the camp, and we passed several guard towers along the way:

After being separated along gender lines, people who arrived to the camp experienced the infamous sorting process of who was fit enough to work and who would be killed immediately. Both groups made their way through this building: 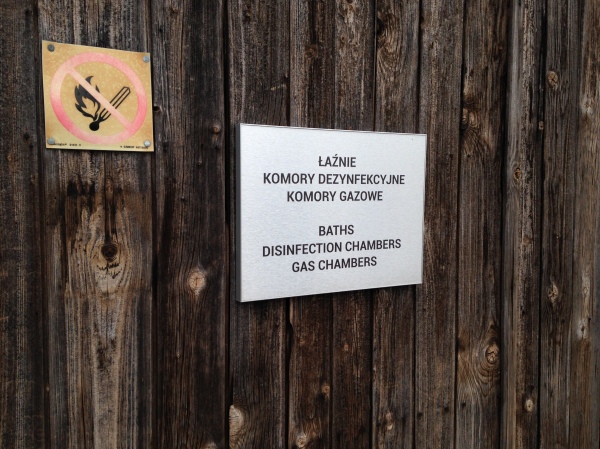 Those who were selected to live were stripped of their clothes, belongings, hair, and sent to this room where actual water came down from the shower heads on the ceiling. The water was often freezing cold and then boiling hot: 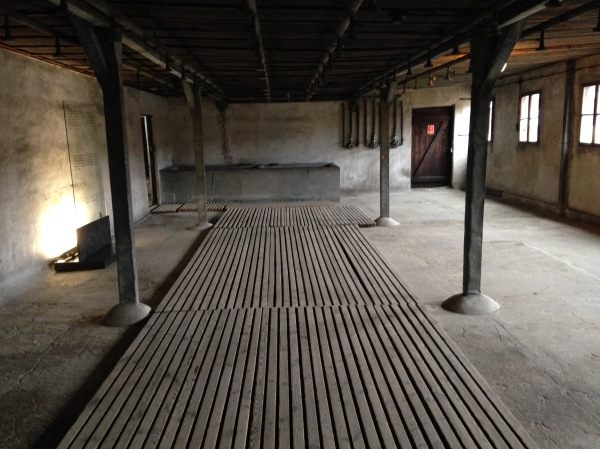 The clothes of all the prisoners were disinfected in another room in the same building. The disinfectant used for the clothing was Zyklon B, the same chemical that would later be used in the gas chambers to kill people. The pictures below show empty Zyklon B containers as well as stains on the walls of the rooms where the chemical was used: 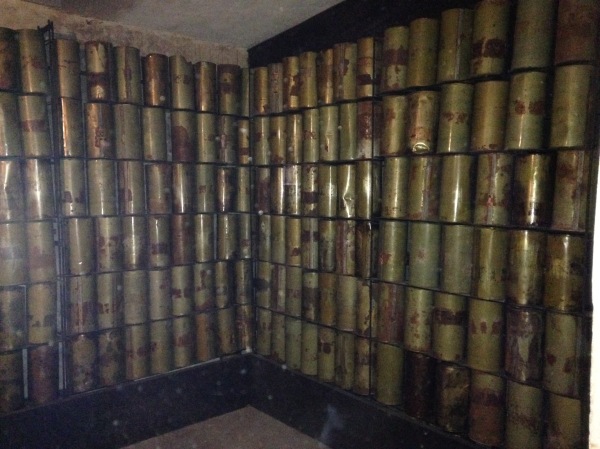 Those who were not sent to the real showers, were sent to the ‘showers’ – the gas chambers were referred to by this code name so as to decrease the likelihood of revolt. Those who were to be gassed were crowded into a small room:

An SS guard would stand outside in a small adjoining room and dispense poisonous gas through metal pipes into the room. The SS officer would also watch the death of those in the room through a small grated window:

Most of the people who died in the gas chambers were women, children, and the elderly, although men who were too sick or emaciated to work were also killed in this way.

After leaving the bath and gas house, we walked about 30 minutes towards the other end of the camp, stopping to take a glimpse into one of the barracks: 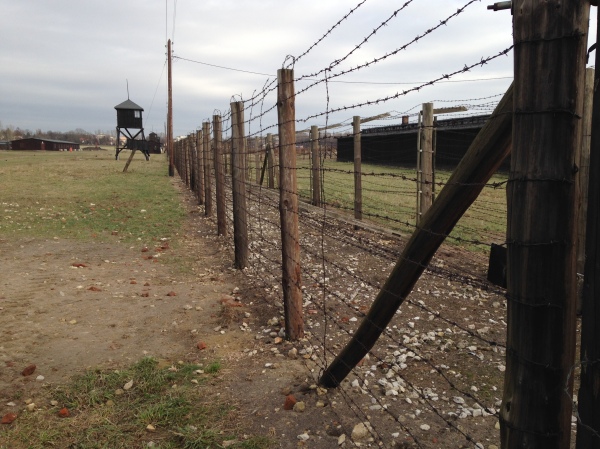 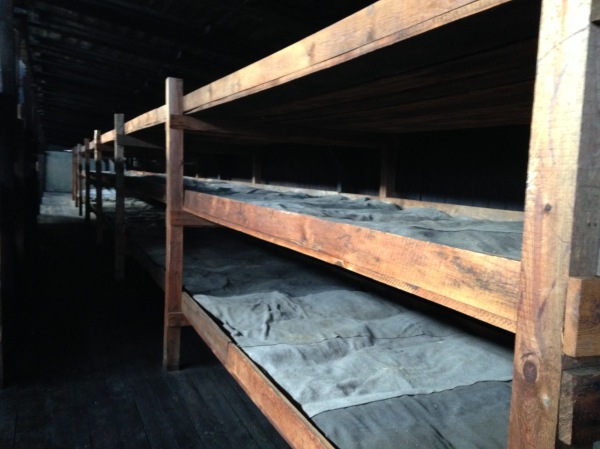 At the far end of the camp was another piece of artistic memorialization.The writing on the outside of the dome reads, “let our fate be a warning to you.”

Inside the dome, are the ashes of prisoners cremated at the camp, collected when the camp was liberated in 1944. 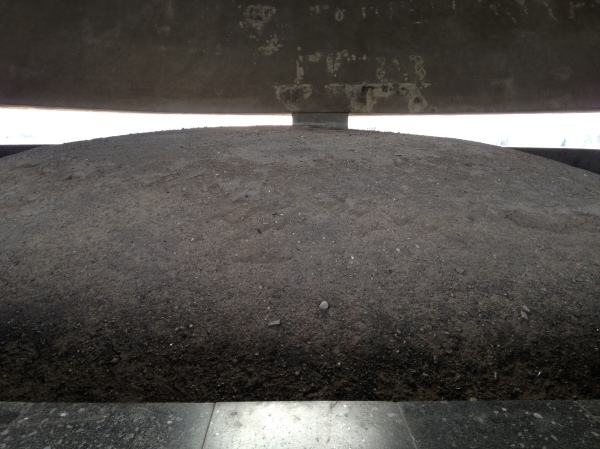 This was one of the two most disturbing sights for me during the entire trip (the other being a seemingly endless mound of hair at Auschwitz). I don’t know what I was expecting when I approached this mausoleum, but when I looked in and saw the above pile of ash, it was too much for me and I walked away immediately.

The crematorium, where these ashes were produced, is right next to the mausoleum: 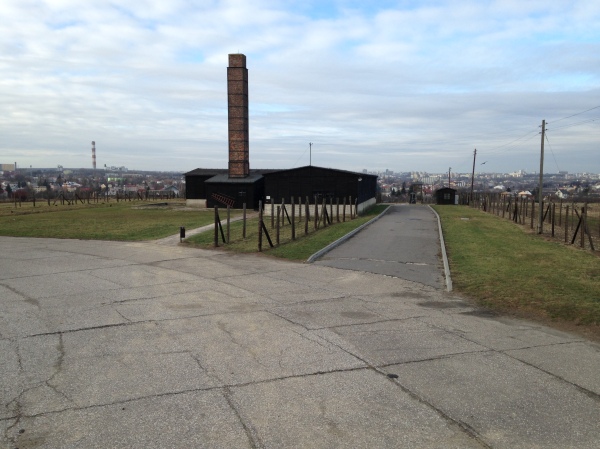 And, as a final reminder of destruction, there are also mass burial pits at this end of the camp next to the crematorium and mausoleum. These pits hold the bodies of Jews killed during Aktion Erntefest (Operation Harvest Festival), a ‘cleaning up’ operation in which about 42,000 Jews were killed in two days in November 1942. This was an attempt to wipe out those Jews who had not been killed by the three Reinhard camps.

While this was another heavy day, I also experienced a lot of feelings of gratitude and appreciation. The silver lining, for me, of this type of trip is feeling an immense desire to treasure the good things in my life, the people I love, and the good fortune of my own relative safety in the world. Seeing sites like those described above makes it difficult to complain about little things or to not feel amazed at the good fortune and blessing of my own life.

2 thoughts on “Visiting Lublin and Majdanek”