Last weekend, I participated in a Shabbaton with Pardes. All the students spent Shabbat together at Hotel Yehuda, located in southeast Jerusalem near the Biblical Zoo. You know you’re in an Israeli hotel when the gift shop is full of Judaica:

The hotel was so nice! I haven’t stayed in a hotel in a quite a while, so that might have been part of my amazement, but the rooms were really nice with a great balcony and views: 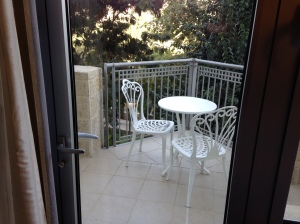 The shower was a little odd with some sort of nature scene plastered against the wall (ignore my creepy reflection in the photo):

The main lobby also had a large balcony with a restaurant/bar and great views overlooking Jerusalem:

The real highlight of the hotel was the food! Like most Israeli hotels, Hotel Yehuda has some sort of cafeteria/buffet area. This is not your average cafeteria spread though. For lunch and dinner, there were multiple meat options, salads, breads, desserts, vegetables, potatoes, pickles…you name it. 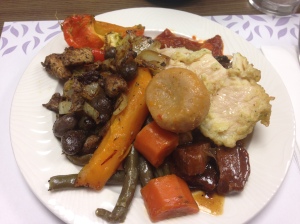 For breakfast, there was an impressive spread of cheeses, yogurts, fruit, puddings, baked dishes, eggs, and an awesome espresso machine! 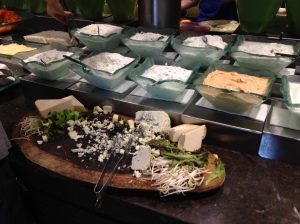 On Friday afternoon before Shabbat started, the group went for a short hike along the Israel National Trail (INT). The INT is a trail that crosses Israel from North to South and is about 620 miles in total. Many people hike the trail in its entirety over a period of several weeks, but people can also do small sections of the trail for anywhere between a few hours and a few days. With the Pardes group, we hiked a short section near South Jerusalem, but I definitely hope to revisit the trail several times during my time here! There were some great views from the section I did last Friday:

It was nice to get out of the main city area where I’ve been spending essentially all my time, and the weekend ‘away’ made me eager to plan some other Israel adventures!