This past weekend, Noah’s sister visited from Chicago. I’d say it was an opportunity to act like a tourist…but I sort of think we always act like tourists.

Rachel got here Friday afternoon and we went to the Midtown Global Market (site of Kitchen in the Market) for dinner and then to a Ragamala Dance show at the Walker.

No pics from Friday, but there are plenty of photos from Saturday’s activities. It was a super active day, with a run in the morning and most of the afternoon occupied by a bike ride.

Noah and I each had our own bikes, and we rented a bike for Rachel from Nice Ride. 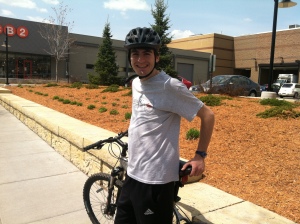 Noah has a leftover Nice Ride membership from the summer, so we were able to get the bike for no charge. Also, Nice Ride has recently added a lot of new bike stations (including one very close to my apartment!) and extended the no-charge ride time for members from 30 minutes to 60 minutes. Noah and I had high ambitions for the bike ride, and we wanted to show Rachel all of the Minneapolis highlights:

Please note the magical fact that all of these wonderful locations were accessible via protected bike path.

We somehow mustered the energy to hit all of the spots, although we didn’t actually bike along the chain of lakes because we could see it some from the greenway and had also run near the lakes that morning.

Hiawatha Bridge along the Midtown Greenway: 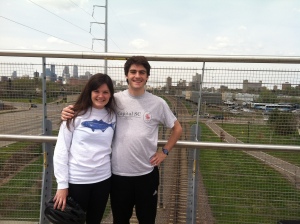 View from the bridge linked the east and west banks of the University of MN:

View of the Guthrie and Mill City Museum from the Stone Arch Bridge:

Slightly over two hours later, the journey was complete and it was time to return the Nice Ride… 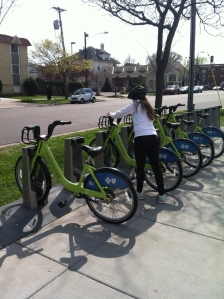 …and get some beer!

A friend of mine has a coworker who knows a guy who knows a guy (yes, I meant to type that twice) who works at the Excelsior Brewing Company and said he would give us a tour, so a group of us headed out there in the late afternoon. Apparently, it was one too many degrees of separation though, because when we got there the fellow in question was out boating and unable to show us around. We somehow managed to recover and sample some of the brews. On tap was a brown ale called Bitteschlappe,  Bridge Jumper IPA, and Big Island Blond. They were out of their pale ale (called XCLR), so those who ordered flights had to double up on a different variety: 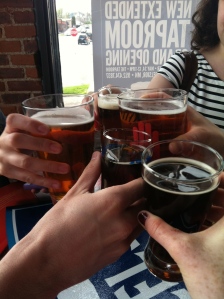 I ordered the brown ale because it had the lowest bitter rating. I enjoyed it for approximately 3oz. and then the beer flavor was too much. They say it’s an acquired taste…but I certainly have yet to acquire.

After a sufficient amount of time in the brewery, we decided to walk around the town of Excelsior. From the drive in, we knew there was a cute Mainstreet that led to a park and pathway along Excelsior Bay. We walked through town to get to the water:

Notice the prom pictures happening in the background behind us. This was clearly a hotspot for photos since we also saw a wedding!

When we got back to Minneapolis, we were all hungry and ready for dinner. We tried to go to Brasa but the line was too long, so we ended up at Bryant Lake Bowl instead.

Noah ordered a bison steak salad, I ordered a beef sandwich, and Rachel ordered a black bean and beet burger: 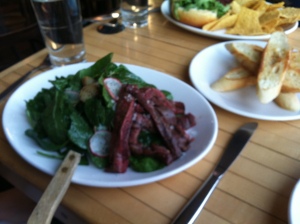 The food was good, but we were still hungry after (maybe because of all the biking!). We picked up a slice of pizza to go from Pizza Luce later in the evening.

It was a lot of fun to have a visitor over the weekend, and I especially enjoyed the bike tour. Especially now that I know I’m leaving Minneapolis, I’ve been eager to go back to all of my favorite places one more time and, of course, take lots of pictures for the memory books!

One thought on “Weekend Visitor”