This past week, I went for lunch at The Lowry. The Lowry opened in 2011 and has been a hot uptown spot ever since. It has great food for all three meals of the day, and by night it turns into an upscale bar that attracts those who want something a little more sophisticated than what’s found at the neighboring Liquor Lyle’s. 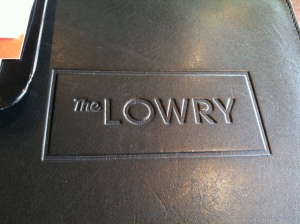 The Lowry has a fairly extensive menu of great looking breakfasts, appetizers, soups, salads, and sandwiches, so it was a challenge to decide what I wanted.

I settled on the grilled cheese sandwich because it is served with a shooter of tomato soup. And, really, that is just too adorable to pass up. My friend ordered a breakfast dish that came with eggs, hashbrowns, toast, and turkey sausage: 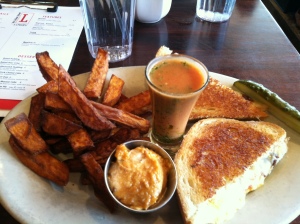 In addition to a great meal out, I also had some good food from my own kitchen last week. I had some leftover kale that I needed to use up, so I came up with a salad using a lot of extra ingredients from around the kitchen.

First, I chopped steamed a half bunch up kale until it just wilted: 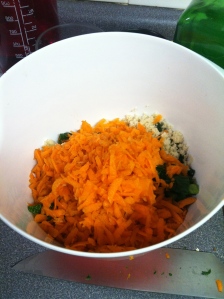 Finally, I squeezed the juice of one lemon into the mix and served with baked thyme chicken breast and sweet potato slivers:

The chicken also was simple and fast to make. I topped the chicken with a little bit of olive oil and some chopped fresh thyme and cooked at 450º for 15 minutes. Cooking the chicken at a high heat for a shorter period of time makes it so much juicier (I’m so glad I learned that trick at Kitchen in the Market with Noah last summer!).