About a month ago, my watch stopped ticking. just-like-that

Since then, I have tried in vain to get it replaced. Okay, actually I only went to Target and was told they don’t replace watch batteries anymore (which presumably indicates they used to?). After Target was a no-go, I was at a loss. Where could I conveniently go? No where, it seemed, explaining why I have been watchless for nearly a month.

Then, one fateful day last week while getting my routine dental cleaning, I noticed this sign: 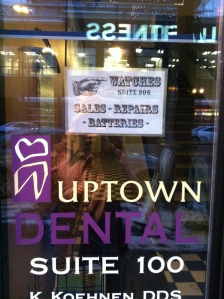 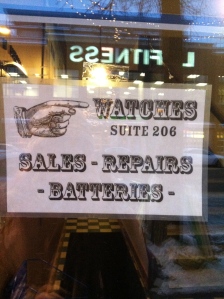 Miraculously, this small sign a mere two blocks from my apartment indicated that help was near. With no indication of a store name, I followed the sign’s direction to Suite 206 and paid a visit to Marshall Ferster.

WOW. This was one neat experience. As soon as I entered the second floor, I found an older gentleman hanging about in the most clock-filled room I have ever laid eyes on. 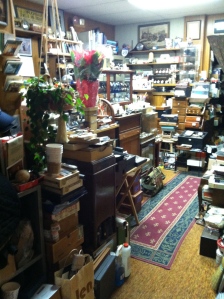 The small office and workspace was filled with watches, stopwatches, clocks, and timepiece accessories. The overseer, Marshall, had a magnifying glass head set securely fixed on his head, and immediately reminded me of Maurice from Beauty and the Beast. He was extremely nice and friendly!

I told him that I saw the sign downstairs and decided to come up to investigate getting my watch battery replaced. He told me I was the first person that had mentioned the sign, also mentioning that his friends wanted him to put a larger sign up to attract business but he didn’t like the idea.

Well, I will certainly be coming back here for any future watch business! After some additional admiring around the room… 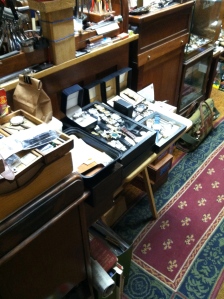 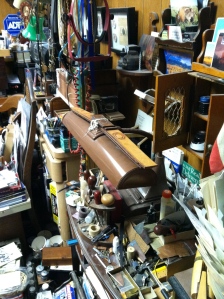 …I got my watch battery fixed for a mere $5! 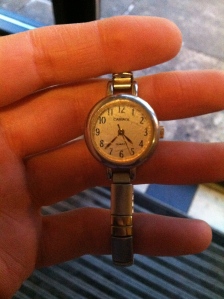 So, to all of you with dead watches and no where to get it fixed, go see Marshall at 1406 W Lake Street in Uptown!