A few weeks ago, I posted about my affinity for online deals. This may be becoming more of a problem as my enthusiasm for such deals begins to border on fanatical.

But, I did hear that the people who get the most pleasure out of spending their money are those who spend money on experiences rather than things. According to that logic, my Groupon fanaticism will make me a happier person in the end. Fine by me. 🙂

The latest deal I purchased was for a place in Richfield called MaltTees Mini Golf and Malt Shop. This deal was clearly not to be passed up given that drinking milkshakes and playing mini golf are two of Noah’s and my favorite pastimes. The deal was almost too good to be true! For $20, you get two rounds of mini golf, a surrey rental, $5 credit towards the malt shop, and two pumpkins. Whaaaaaat a deal, right?!

MaltTees is located within Victory Memorial Park, and we enjoyed a thirty minute bike ride to get there. After arriving, it was straight to the mini golf course:

Since we were keeping score, things got pretty serious:

Noah took home the win this time due to some mental lapses on my part….to be avenged another day!

By the end of the round, we were ready for a snack. Due in part, I’m sure, to some not-so-subtle product placement within the course: 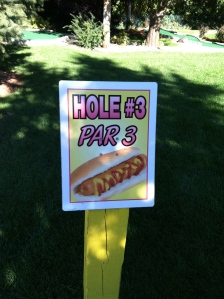 The malt shop offered a basic menu of concessions-style food as well as several malt/shake varieties:

Although tempted by the pumpkin flavored malt…

…we settled on oreo and m&m: 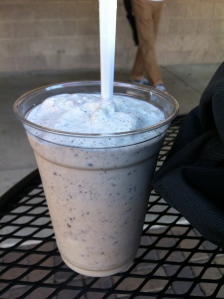 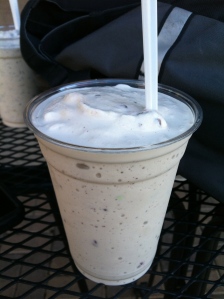 After the shakes, it was on to the pumpkin patch:

As you can tell from the bouncy houses in the background, we were a bit older than the average consumer of this deal. #kid.at.heart

Although we were entitled to two pumpkins with our deal, we realized that we only had my bike bag to transport things home in, so we were limited to one small-ish pumpkin. We found the best one in the whole patch:

and then nestled it cutely into the bike bag:

All in all, this was a great activity and we had a lot of fun. If anything, we would have liked more time to walk around the park, but we had to get home for other things.