My weekly trip to the Wedge Coop last weekend resulted in me coming home with several large sweet potatoes and a humongous bunch of dandelion greens. Now, nearly a week later, I still have both of those items in bulk. What to do? After flipping through a few cookbooks, the Gypsy Soup recipe in Moosewood caught my eye. The original recipe calls for sweet potato, tomato, onion, and green peppers, but Mollie Katzen says in her recipe notes that any orange and green vegetables will work. So, I modified the recipe heavily and made my own….

To start, I chopped up three stalks celery and two sweet potatoes and added them to a large pot with a little bit of olive oil: 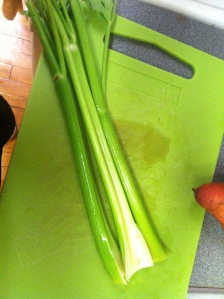 I didn’t think they were cooking much since they were piled so high, so I added a little bit of water in the pot and let steam for about 5 minutes. After a few minutes, I added three cups water along with paprika, turmeric, basil, cinnamon, cayenne, a bay leaf, and some soy sauce: 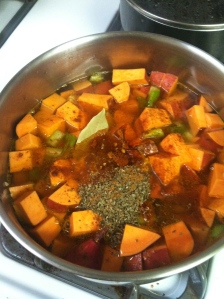 After simmering for about 15 minutes…

I added a half bunch of roughly chopped dandelion greens: 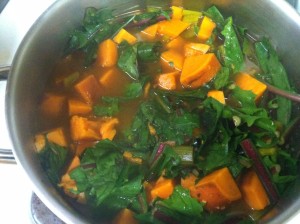 I simmered for another 10 minutes and then added some leftover cooked chicken. I used one wing, one breast, and three legs, but you could use whatever you have on hand!

As soon as I added the chicken, I turned the heat off, stirred to combine, and left in the pot to heat through:

I had the soup for lunch with a cheesy tortilla. I wasn’t familiar with dandelion greens before making this, and they were a little bitter – perhaps a sweeter green, like spinach, would be a bit better. Nonetheless, the soup was delicious with a good spice level. Plus, anything with sweet potatoes is fine by me.

And…since I was in the kitchen I also made a batch of Tina‘s no-bake Almond Joy Cookies. I haven’t had one yet, but they look good! 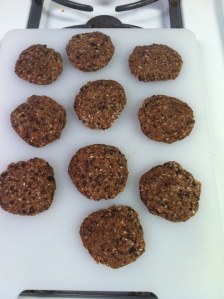