This week, I had the opportunity to enjoy fondue for two at The Melting Pot in downtown Minneapolis.

I found out about a deal they were offering where you could get cheese and chocolate fondue plus two movie passes for a set price. Obviously, I was compelled to reserve this immediately. When we got to the restaurant, we were seated at a table with a special burner and fondue pot: 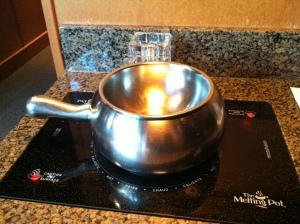 In addition to silverware, we also received fondue spears:

There were a lot of tempting cheese fondues, but we finally settled on the spinach and artichoke. The waitress made the fondue at the table by combining broth, garlic, spinach, artichokes, and a mix of Fontina, Butterkase, and Parmesan cheeses. Plus a dash of tabasco sauce for good measure: 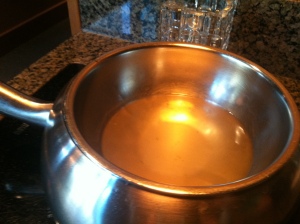 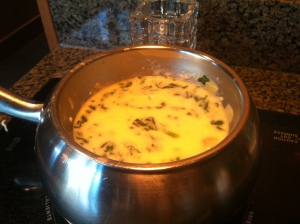 For dipping, we had bread, raw veggies, and green apple: 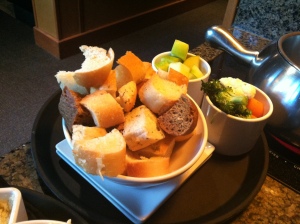 The ratio of cheese to dippers was a little off, and we had some extra bread and veggies at the end. Admittedly, this might have been due to the fact that we slathered each dipper with cheese at the beginning.

Up next…chocolate! Again, the choice was hard, but we went with a turtle fondue with dark chocolate. This came already prepared and hot to the table, topped with candied pecans: 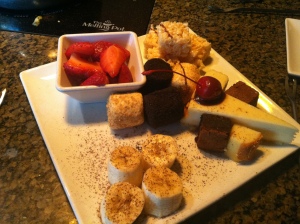 This time, there was more fondue than dippers, and our waitress brought us some extra bananas and strawberries to finish it off.

I’ve only been to fondue once or twice before, so the meal was a lot of fun simply due to its unique quality. Plus, who can complain after a dinner of cheese and chocolate? The dinner+movie deal was a nice incentive to go, but given that it was a fairly expensive meal even with the discount, I suspect a regular fondue dinner would be pretty pricey.

The Melting Pot itself was nice, and our waitress was particularly friendly and attentive. I don’t know if there are other fondue joints around the Twin Cities, but if you’re looking for this sort of meal, this seemed like as good a bet as any. If you just want a nice dinner though and don’t need the fondue experience, you could probably get more bang for your buck elsewhere.

One thought on “Fondue for Two”