Gooseberry Falls State Park was a short 15-minute drive from our lodge in Two Harbors, and we enjoyed a short hike, pictures by the waterfall, and speculating about the interesting geology (we learned that the surface around Gooseberry Falls is volcanic bedrock). 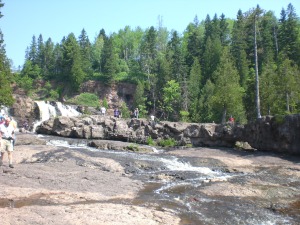 As we hiked, we got several views of the falls: 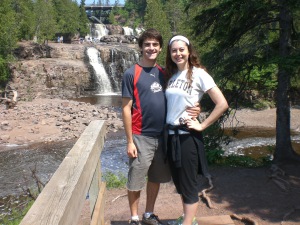 After finishing the hike, we had a quick lunch of peanut butter & jelly sandwiches, and then took the 20-minute drive (or so) to Split Rock Lighthouse.

Split Rock Lighthouse is run through the Minnesota Historical Society. After a horrible storm in 1905 left many sailors dead, this light house was constructed. Before the lighthouse, this area was particularly deadly because the magnetic interference of the iron ore within the rocks at Split Rock would throw compasses askew as far as 18 degrees!

Today, you can visit a small history exhibit, take tours of the facility, climb up the lighthouse tower, and see costumed guides showing what the lighthouse and the keeper’s home were like in the 1920’s.

This is what the lighthouse lens looked like from within the tower: 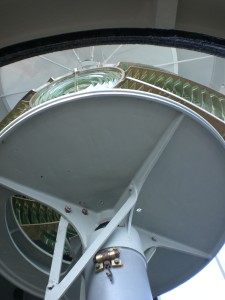 View from the top:

Keeper’s home furnished to reflect what it would have been like in the 1920’s:

After finishing at the lighthouse, it was time to head back to Two Harbors to check out the action in town. Check back soon for a rundown of Two Harbors Heritage Days.

One thought on “Gooseberry Falls and Split Rock Lighthouse”