In case you haven’t read the news lately, here are a few highlights from the last year:

1. Last November, Minnesota defeated a proposed amendment to their state constitution which would have defined marriage as the union between one man and one woman.
2. In May, Minnesota became the 12th state to legalize same-sex marriage. 3. In June, the US Supreme Court struck down the Defense of Marriage Act (DOMA), giving federal rights to same-sex couples.

As you might imagine, this years Twin Cities Pride Festival last weekend had a lot to celebrate. 🙂

Although there were concerts, parades, and events throughout the whole city over the weekend, the main area of celebration was Loring Park where hundreds (yes, HUNDREDS) of booths, vendors, and activities were set up:

As another bike-friendly event (this is Minneapolis, after all!), there was special bike parking inside the park:

It took well over an hour to walk through all of the booths: 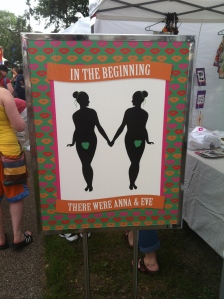 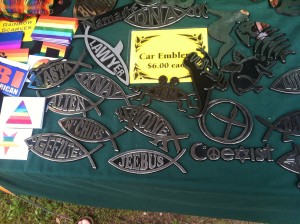 It was great to see so many people out for the Pride Festival, and hopefully there will be even more to celebrate next year!