My DC posts are all a bit delayed as I was too busy with my friends and at the AIPAC conference to write them in real time, but you can enjoy them now….and it’s sort of like I get to enjoy the experiences TWICE!

For my first full day in DC, we got up to have ‘breakfast’ (quotes since it was approximately noon) at the American City Diner. Since the diner was only a few blocks away, we walked there.

This was a truly traditional American diner – jukebox and everything!

Our table was on an indoor patio, and we had a view across the street. 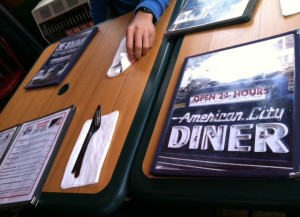 The menu had all the diner essentials: milkshakes, eggs, home fries, french fries, and sandwiches of many colors. I ordered the Eggs Florentine, and it was so good I completely forgot to take a picture before eating it. Oh well!

After brunch, we headed out to explore DC. Stops included:
– the Washington Monument
– the Freer Art Gallery
– the Capitol
– the Sculpture Garden
– the National Gallery of Art

At the Freer, two things stuck out to me. The first was the Peacock Room. In addition to being great simply due to it’s name, the golden paintings of peacocks within were very beautiful: 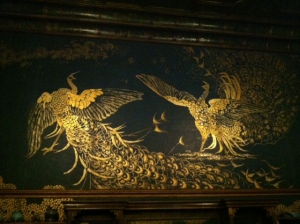 The second was ‘Monkeys Grasping for the Moon,’ a sculpture (of sorts) by Xu Bing. 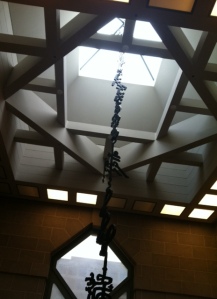 The monkeys sculpture hangs down from the ceiling, with the word for ‘monkey’ artistically written in 21 languages and strung together, a la monkeys in a barrel. The sculpture runs from the ceiling, down through several museum levels, and finishes just above a pool of water on the lowermost level.

The pool is meant to represent a lake shimmering with the reflection of the moon. The piece is inspired by a Chinese folktale in which a group of monkeys unite in an attempt to capture the moon. To do so, they link arms and tails to form a chain from the branch of a tree to the moon. When they reach the ‘moon’ though, it is only to discover that it is really just a reflection on the surface of the pool beneath them. The moral of the story is that often times the things we work hardest for are nothing but illusions.

Continuing our art education for the day, we stopped by the National Gallery of Art. We didn’t originally intend to go, but we (meaning me) were drawn in by an advertisement for a photo exhibit called Faking It. The exhibit focused on the manipulation of photos prior to photoshop and other modern technologies. The gallery in its entirety is quite immense though, and we made several detours on our search for the Faking It exhibit. Example A, mobiles in the ‘colored paper’ gallery:

Will they move if we blow on them?? 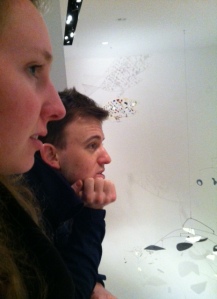 After the long day of exploring, we were looking for someone to eat dinner that would be delicious, affordable, and good for accommodating a large group. The answer was found at Indique Heights in the Friendship Heights neighborhood. 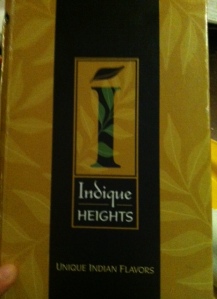 I’m not always a huge fan of Indian food, but I really enjoyed my meal here. Of course, it’s hard to not to enjoy a meal when you are with such great company:

The service and restaurant atmosphere were both great. There were sauces on the table when we arrived…

…and the food arrived much quicker than anyone expected. One of the reasons I think I don’t always enjoy Indian food is that the dishes start to get monotonous for me. Luckily, Indique offered a Thalis (combination dish) with small portions of several menu items. I ordered the Vegetarian Thalis, and got a sampling of 4 different vegetarian dishes, lentils, mango rice pudding, and raita. Plus naan and rice. This was too much food to finish, but it was delicious and good for sharing around the table! 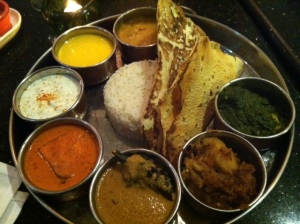 Among the dishes others enjoyed were lamb biryani and chicken tikka makhani: 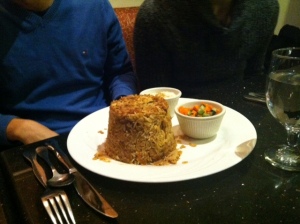 Everyone enjoyed their meal, and if I lived in DC I would definitely come back to this restaurant. Since I was taking pictures throughout the meal, Cameron perused my blog to get the scoop.