1. Blogging! My first attempt at blogging was an ill-conceived, highly structured, and enormously time consuming endeavor. My plan was to write once a week about one recipe, one uncovered beauty, one learning, and one error. Like I said…way too structured. I gave up on that after exactly two posts but am now back (obviously) in the blog world, loving it more than ever.

2. Food! I’ve already written a little about my history with an eating disorder. During that time of my life, food was something to be feared and, often, dreaded. Going to a potluck or dinner where I couldn’t make my own meal? Attending an event that would have snacks out for the taking? Receiving food from friends or family as a gift? All of these things were occurrences that created great stress and anxiety. I would go crazy thinking things like: What should I allow myself to eat? How can I get out of this without eating anything? If I eat one thing, will I eat everything? Where is the nearest garbage can I can throw this bag of cookies away in? One of the hardest things about recovery was learning to trust and even *gasp* enjoy food again. Now, I love making meals for myself, trying new restaurants, and going grocery shopping. Food is a big part of life – we need it to survive! – and I’m so glad to have it as a friend again and not an enemy.

3. Basketball! I have literally played basketball all of my life. There are pictures of me as an infant holding a mini-ball in the crib, and – at least according to legend – my first word was ‘ball.’ From the minute I was old enough to play in an organized league, I was on a team. I played year round through junior high and high school, and walked on to the varsity team at college where I played for my freshman and sophomore years. During season at college, I was often at the gym close to 30 hours a week, and practice/games/watching film completely dictated my schedule. What’s more, I had pretty much completely stopped enjoying the game. Playing basketball was a chore – an item on each day’s to-do list – that brought far more stress than enjoyment. Honestly, I had stopped enjoying the sport long before I quit playing, but I loved being part of a team and feared regretting a decision I couldn’t undo. When I finally did quit at the end of the season my sophomore year, I had absolutely no desire to play basketball again. After a couple years went by, I gradually started to feel the ‘itch’ to play again. Last year around winter time, I took the leap and decided to join a rec league. I lucked out and got connected with an awesome group of girls who I have now played 2 basketball, 1 volleyball, and 3 softball seasons with. Right now is basketball season, and every Wednesday evening at games I have the time of my life!

Which brings me to tonight…

Tonight was our third game of the season. Unfortunately, we ended our winning streak (lost by 5), but I still had a great time and thought we played hard. Plus, I found this gem on my way out of the gym:

One of the girls on the team was really nice to invite us all over to her house afterwards for dinner. She gave us the classy treatment and ordered Pizza Luce. 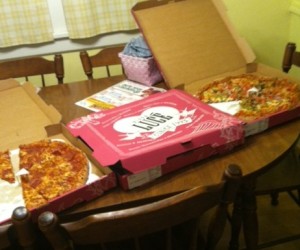 I had three slices of veggie.