This will be my first post about running here on Treasure Your Being. There are two main reasons for that. 1) I am fighting a knee/IT band/hamstring/I have a weak butt issue, and 2) my history with running is a little complicated and I didn’t quite know how to begin. So, here goes….

I first started running regularly the spring of my freshman year in college. I had always been an athlete, playing sports year round during high school and as a member of the varsity women’s basketball team at my college for two years. I started running in the spring of my freshman year after basketball season ended as a way to start trying to combat the weight I had put on throughout freshman year. The running combined with a more careful eating plan returned me to my pre-college weight by the end of the summer. Unfortunately, something about the whole running + watching what I ate + losing weight thing got a little too appealing. I decided I didn’t want to just get back to my pre-college weight, but also to lose an additional , , , , , thirty pounds. Soon enough, what had started as an innocent desire to lose the excess weight of freshman year turned into an obsession with counting calories and overexercising as a way to unnecessarily lose weight. The process truly was gradual, and if you had told me when I first started dieting and running that in only a few months I would weigh thirty pounds less and be running up to two and a half hours a day, I would have told you that you were crazy.

Although I wasn’t charting my miles at that time, I would guess that throughout my sophomore year I was running around 40 miles/week plus several hours of cross training. Junior year I continued to overexercise and heavily restrict my diet, but I also began to take my first steps towards recovery and attempting to manage my unhealthy thoughts and attitudes. The real turning point came during my senior year. I started attending counseling once or twice a week, stopped weighing myself, and tried to stop calorie counting as best as I could. It was a long process – with a couple pivotal moments – that brought me there (and I’m sure I’ll write more on that one day!), but I finally had begun to seriously recovery and change not only my behavior but also my thoughts.

Which brings me back to exercise…when I was exercising 2+ hours a day, I was often doing so for very bad reasons. I felt that I needed to exercise that much to avoid gaining any weight, and when I ate ‘badly,’ I thought that I needed to exercise even MORE to offset the extra calories. This was NOT a healthy attitude towards exercise, and looking back I feel sad about all of the other wonderful things I could have done and experienced with all those extra hours at the gym.

Still, the fact always remained that – whatever the motivations – exercise really did make me feel better. Often, the happiest I was – and the best I felt about myself – was while I was running. I loved the way it made me feel strong and capable, and there is hardly a better feeling than a great shower and comfortable clothes after a nice hard run. One of the greatest things about my recovery is that I have been able to reclaim running as something that I do for me. I run to be healthy and happy and, most of all, because it is FUN. 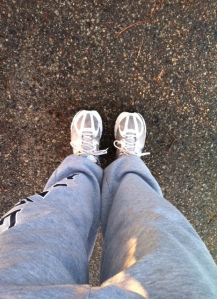 Although I’m not perfect and there are still days that I fight unhealthy thoughts about food and exercise, just thinking about how far I’ve come is motivation enough to keep going. So that’s my running story. See you around the lakes, maybe? 🙂

while jogging around Lake Calhoun at sundown

3 thoughts on “As the Sun Goes Down…”